The Advance of Unreason 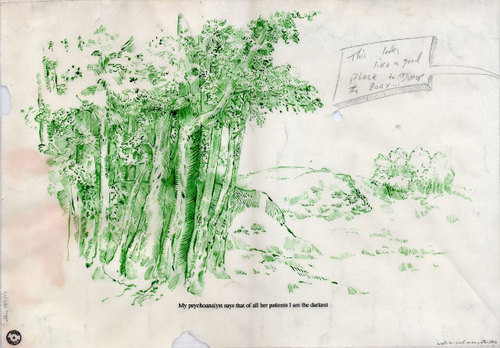 The Advance of Unreason

Hales Gallery is pleased to present The Advance of Unreason, new works by David Godbold.

The eloquence and comedy of everyday utterances that abound in shopping lists, notes, handmade signs, letters, diary pages and doodles provide a potent catalyst for David Godbold’s work. He layers these found papers with his own renderings of images and texts appropriated from all manner of sources – a school kid’s mathematical workings out overlaid with a drawing of Tintin, perhaps, or a dear John letter legible under a delicate drawing of religious iconography – and each is captioned with a phrase that adds another spin altogether.

Each element donates its cultural and poetic baggage to the mix, which Godbold reconfigures with a wit that is at once satirical and celebratory of human foibles. His process of authorship is one of fragmentation and layering, intermixing high and low culture, the archaic and the up-to-the-minute, the base with the intellectual. Brian from Big Brother, for instance, is a veritable font of comedy gold, while the Renaissance provides a rich seam of grand narratives ripe for corruption.

The gem of a phrase ‘The Advance of Unreason’ was found tucked away in a recent edition of The Irish Times. Its absurdist turn appealed to Godbold; in fact you might say that the advance of unreason sums up his methodology, his intent even. For Hales Gallery Godbold has made a new series of some 35 collaged drawings and a number of larger paintings of apocalyptic landscapes that adopt a punkish aesthetic, as well as a large wall painting – his first in colour.