UBIQ : A Mental Odyssey. A one-year programme in 10 chapters. Chapter VIII. A journey in time and space where reality and fiction will echo each other, either shrink, swell, or seem forever at odds with one another. Kubrick's recurring associations create an idiosyncratic, aesthetic vocabulary which blends the whole. To boot, the influence of the film is here expressed in the radical reversal of time passing. 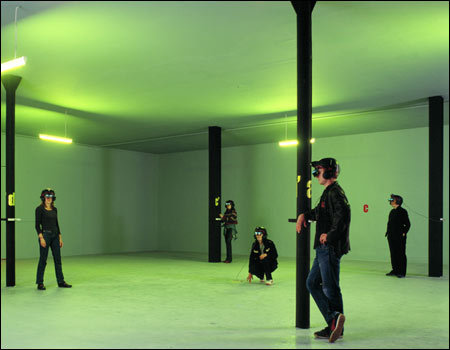 One should never go unprepared in terms of armament. This goes for one’s space ship, one’s own mind and one’s own body as well. Concerning the departure itself, one knows more or less everything about it, since it was carefully prepared. But what is to be expected ahead, either flat or deep, is yet unknown. This Odyssey is neither chosen nor wanted, it’s not even inflicted. There it stands, unavoidable, like a pure evidence.

To find one’s bearings through the Galerie Maisonneuve is an attempt, an attempt to structure the odyssey, but simultaneously an attempt to distort it, melt oneself in it — in short : to recognize it. One might get a shot in one’s arm, swallow a piece of blotting paper, have a snuff of snow, chew some grass. All these have already been tried, and one knows by heart these paths which have one day turned to marble.

It will rather partake of a memory, of a nostalgia, of an existence lived by proxy, of a road opening onto several labyrinths, of the victory of schizophrenia over reality. In short, it will partake of the contradiction which consists in describing the world as seen from inside this very world. 10 chapters or stations. There will be 10 chapters or stations — may be more, may be less — but they will appear in succession, according to an order alien to chronology or the generally admitted
notion of time.”
Mathieu Briand, December 2006

The Galerie Maisonneuve has offered an entire year and the whole gallery space to the artist Mathieu Briand there to develop his project UBÏQ : A Mental Odyssey., whose format and timing are a challenge for the mere structure of a gallery. From January 2007 till January 2008, the gallery will unfold the ten chapters of the artist’s visual, mental and perceptive “odyssey”, a journey in time and space where reality and fiction will echo each other, either shrink, swell, or seem forever at odds with one another.

Scrutinising the interweaving of life experience and its imprint on the imagination, Mathieu Briand fathoms the quality of today’s world whose reality is confined in the naming of it alone. It is obvious that when confronted to each other, neither life nor imagination has the upper hand, but what we consider as real is the constant intertwining of both.

To this purpose, the artist has partly adopted the visual language of Stanley Kubrick’s cult film 2001: A Space Odyssey. Kubrick’s recurring associations create an idiosyncratic, aesthetic vocabulary which blends the whole. To boot, the influence of the film is here expressed in the radical reversal of time passing.

The appropriate word to describe Mathieu Briand ‘s project is definitely “manipulation”. As would a prestidigitator, Briand leads us into his private world — a world made of personal references, either self-experienced or dreamed of — and to this purpose the tricks he uses are material objects and visual events alike. These references are brought together and distanced again ; in the illusionist perspective thus created, another world emerges, with multiple entrances and no known frontiers.

When so doing, he attempts — while questioning and even dissecting a certain number of elements — to lead the viewer to find a way of its own and in order to achieve this form of training, he paves the way of the viewer with compulsory questions about his surroundings. The outcome of this seminal obligation requires necessarily the unravelling of threads, i.e. the threads of one’s own perception of the world, the threads of one’s own history. This ambitious time-space realisation was mounted for the first time at the Los Angeles REDCAT Theater and later at the Boston MIT List Visual Center where it will be on show until April.