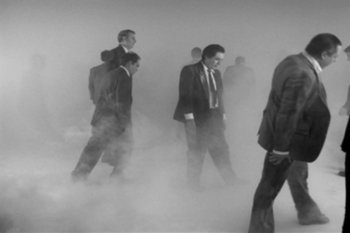 The Praz-Delavallade Gallery is pleased to announce the new one-man show it will devote to the Los Angeles artist, Jim Shaw.
Since the late 70s, Jim Shaw’s evolution has taken the form of cycles, developing, through several series, an original and discontinued narration.

The Hole is a show-fiction, anchored in the story of O-ism, a cycle begun in the late 90s, the history of an imaginary religion fantasized by the artist. O-ism gathers a corpus of works about that fictitious religion inspired by the assorted and sometimes unlikely religious movements that appeared in the US during the 19th century. This particular faith is supposed to have arisen in the Finger Lakes area, sometimes in the mid-17th century. It preaches, along with the workship of a female deity, referred to by the letter O, a belief in reincarnation, the backwards march of time, sometimes even a strict prohibition of any figurative representation.

Jim Shaw relentlessly defines and refines the historic evolution, the dogmas and rituals of that religion. Each work in the series indicates what postwar visual culture might have been, had O-ism really existed.
Thus, The Hole, first fiction film realized by the artist, appears as an O-ist horror movie. In it, a new female convert to the religion, peering through a hole in her apartment wall, discovers a parallel world where zombies stroll in an ill-defined “somewhere”, beyond which space becomes abstracted.

Jim Shaw borrows his esthetics from low budget flicks of the 80s. He creates an intriguing parallel between these minor productions’ special effects and abstract expressionism, a thread that runs through all of his late work. This leads him to the discovery of a relationship between American mass culture and his own artistic instincts.
This strategy is emblematic of Jim Shaw’s work : while pretending to show products of a visual, commercial pop or underground culture - objects he did not create himself, he will ascribe his own works to fictitious artists, or simply laymen, inspired by that religion.

That is the case for the paintings and the series of photos presented in this show, supposed to be old promotional material for O-ist films. Paintings are, as well, supposedly created by some commercial illustrator, to be used in movie posters.
Jim Shaw challenges the intrinsic authority of art, just as he questions his own identity as an artist, by eschewing there any personal style. That is to say, except, perhaps, in the confusion of styles and the heterogenous references.
In the new space of the Gallery, located at 10 rue Duchefdelaville, Jim Shaw presents an installation he will animate on the occasion of a musical performance at the vernissage, titled The Vacuum Cleaners. This involves an ensemble of 8 sculpture-objects: musical insturments fashioned from old vacuum cleaners of the 50s that have grown strange, abstract appendages.
This orchestra of the absurd is enlivened by a video projection and a recording of the performance staged at the LACMA in August 2007. This takes place in the continuity of the series titled The 360 Degree Ritual which used the supposed paraphernalia left over from an O-ist initiation ritual, as staged in a performance by the artist.
Through the arious means used - paintings, installations, films and performance - Jim Shaw propels the viewer into the core of his creation-fiction. In this imaginary universe, he first selects objects, then envisions them, bringing thereby sensorial evidence of the reality of his own vision.