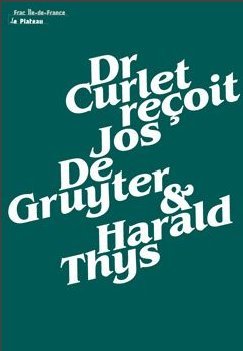 To kick off the 207 fall season the Plateau has invited the French artist Francois Curlet to be the honorary "maste of ceremonies", or MC Curlet as he often refers to himself as. In return, Curlet has decided to use his carte blanche to invite Harald Thys and Jos de Gruyter, two Belgian artists never before shown in France.

Singled out for its bizarre juxtapositions, illusions of scale and mixing of medium, the work of Curlet utilizes semantic distorsions to reveal a reality all too often hidden from the public eye.

At the Plateau he will be presenting two new works: Rocking Chair, an eponymous object-sculpture, as well as a video shot in the Spring of 2007 at the actual Chateau-Gontier, featuring an improbable encounter between a few faithful clients and a charming British lady.

Alongside these two works, Jos de Gruyter and Harald Thys will be showing their most recent pieces, including a science fiction film and an installation composed of the homemade robots which appear in the video. Also, an ensemble of other works will be presented, revealing the artists' unique universe which burlesque, sometimes tragic characters are filmed in a series of extraordinary situations straight from the absurd.