An exhibition conceived as a "impossible" project curated by artists Stefania Galegati and Marco Raparelli. It is based on the stratification and the mixing of languages, and on irony. Part of the exhibition is a series of posters, the subject of which is curators' dreams. 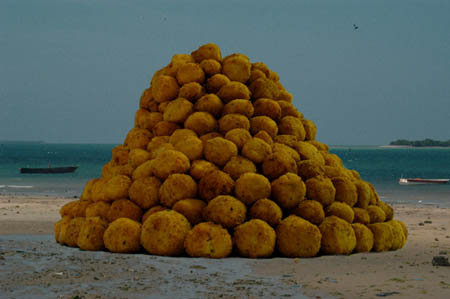 In the project As a Drop of Water on a K-Way… artists Stefania Galegati and Marco Raparelli - alias the two young curators Scintilla Robina and Norberto Dalmata- are engaged for months in an e-mail conversation that aims at conceiving and organising their first exhibition together an exhibition that turns out to be “impossible” for several reasons. In the course of the e-mail exchange Norberto and Scintilla speak about their curatorial strategies, their professional role models, the artworks and the artists they would like to have in the show, their emotions and insecurities, and of how to become “successful curators” in the global art system. The conversation, hilarious and mocking at times, is conducted in English - which is obviously not their mothertongue, and has been printed as an artist book(ed. Fine Arts Unternehmen Books, Zug, 2007).

The project is based on the stratification and the mixing of languages, and on irony. The exhibition includes some of the material and pages from the book (texts, drawings, cut outs), and further develops the curatorial collaboration between the two fictitious, but “by now real”, young curators in the Berlin context. Part of the exhibition is also a series of posters, the subject of which is curators’ dreams, collected by Scintilla and Norberto in the months leading up to the show. The two young curators have invited more “established” colleagues to send drawings or texts, in A3 format, with the descriptions of their dreams. The posters will also be presented in various art locations in Berlin and in the public space. For the show at uqbar Scintilla and Norberto moreover promise to display some works of “very important” contemporary artists whose names will be revealed after the opening. The exhibition will be accompanied by a melodic soundtrack that will emphasize the character of the project.

As a Drop of Water on a K-Way… is a collaboration between uqbar and Critical Care, a platform for contemporary curatorial practices, and the first of a series of common initiatives on the relationship between artists and curators, and on the strategies of dissemination of contemporary art today. Critical Care is a collective based in Berlin, initiated by Marina Sorbello and Antje Weitzel (supported by OTC). The exhibition As a Drop of Water on a K-Way… is realized in cooperation with the Italian Cultural Institute Berlin, and supported by GAI - Association for the Young Italian Artists Circuit / MOVIN'UP PROGRAMME. Stefania Galegati (Bagnacavallo RA, 1973) lives and works in Italy and in New York. Her alter ego, Scintilla Robina is a young curator and collaborates with some magazines like Donna Oggi, and Fitness and Culture. She has been the art curator of the Diesel store in New York, since 2005. She lives and works in New York. Marco Raparelli (Rome, 1975) lives and works in Rome. His alter ego, Norberto Dalmata is a critic and philosopher. He studied at the Moderna University of Siena. He collaborates with many art magazines, like Brufolo and Flash Art Slovakia. He lives in Rome.

With the kind support of DEGEWO