Finalist's Exhibition: the 4 artists who have been shortlisted for the Turner Prize 2007. Zarina Bhimji presents a new series of photographs and a new film, Nathan Coley with a carefully orchestrated installation, Mike Nelsona with new immersive Amnesiac Shrine, Mark Wallinger with the records of a live performance. Winner announced on 3 December 2007. 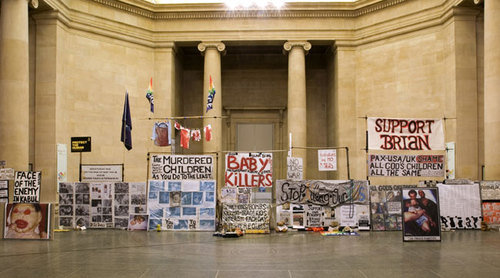 The Turner Prize is a contemporary art award that always provokes debate and is widely recognised as one of the most important and prestigious awards for the visual arts in Europe. The four artists who have been shortlisted for the Turner Prize 2007 are Zarina Bhimji, Nathan Coley, Mike Nelson and Mark Wallinger.

For the first time the prize is to be held outside of London, at Tate Liverpool, as a curtain-raiser for Liverpool European Capital of Culture 2008. The Turner Prize exhibition will feature the work of four short listed British artists and will open at Tate Liverpool on 19 October 2007. Book your tickets now to see the exhibition before the winner is announced in December.

The shortlisted artists for the Turner Prize 2007 are:
Zarina Bhimji who presents a new series of photographs and a new film, Waiting 2007, made following her recent travels in India, Zanzibar and East Africa. The works emerge from a lengthy period of research into the countries' discrete yet intersecting histories. However facts and figures ultimately give way in her images to instinct and intuition, as her rigorous attention to composition, light, form and texture convey qualities of universal human emotion and existence.

Nathan Coley who presents a carefully orchestrated installation that brings together works in various media. Rooted in urban and social practice, and underpinned by detailed research, Coley's art explores the ways in which systems of social and political value can be inferred through the built environment. Meaning and intent is revealed through our physical engagement with the work to open up a range of possible readings; religious, political, as well as purely aesthetic. In addition to THERE WILL BE NO MIRACLES HERE 2006, Coley will be showing new works made especially for the exhibition.

Mike Nelson who presents a new, immersive Amnesiac Shrine. After a hiatus of nearly a decade the Amnesiacs, a mythical gang of bikers invented by the artist in the mid-1990s, have made a recent comeback. Here Nelson turns to them once again for their help in building AMNESIAC SHRINE or The misplacement (a futurological fable): mirrored cubes - inverted - with the reflection of an inner psyche as represented by a metaphorical landscape 2007. The materials and references used to construct it, provided by 'flashbacks' from the Amnesiacs, are elevated by their devotional context yet remain largely indefinable.

Mark Wallinger who presents Sleeper 2004/5. The work records a live performance in which the artist, dressed in a bear suit, occupied the Neue Nationalgalerie in Berlin. The bear, symbol of the city of Berlin, was alone in the museum for ten consecutive nights. In this meditative yet disquieting work, notions of national memory and allegory converge to continue Wallinger's examination of the themes of identity and representation.