Japan and the West

The exhibition continues the examination of Markus Bruderlin of the oppositional relationship between 'ornament and abstraction' by exploring approaches to the concepts of 'fullness and emptiness'. Works by Carl Andre, Joseph Beuys, Paul Klee, Wolfgang Laib, Agnes Martin, Gerwald Rockenschaub, amongst many others. The new Japanese garden in the sculpture court of the museum will be officially opened. 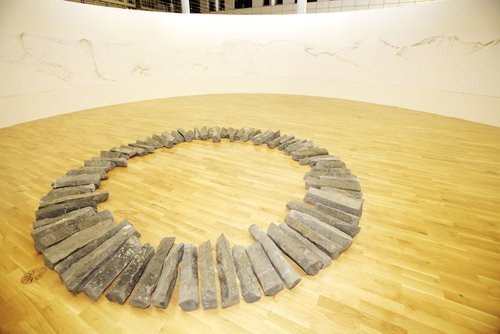 The exhibition Japan and the West: Fulfilled Emptiness at the Kunstmuseum Wolfsburg is the realization of a long-planned project based on a concept developed by Markus Brüderlin, the director of the Kunstmuseum since January 2006. In conceptual terms it is also closely linked to the exhibition Ornament and Abstraction: The dialogue between non-Western, modern and contemporary art, which was held in 2001 at the Fondation Beyeler in Riehen near Basel, where Markus Brüderlin was previously Chief Curator. In the current exhibition Brüderlin continues his examination of the oppositional relationship between ‘ornament and abstraction’ by exploring approaches to the concepts of ‘fullness and emptiness’. Along with the exhibition, the new Japanese garden in the sculpture court of the Kunstmuseum Wolfsburg will be officially opened.

The exhibition follows a dialogical principle: works by artists of Western modernism are confronted with traditional Japanese artworks and craft objects such as Zen painting, ceramics, Samurai swords, calligraphy, textiles, lacquerware and utensils used in the tea ceremony. For example, Paul Klee’s (1879–1940) painting „Schwarze Zeichen“ (Black signs) encounters a broken tea bowl dating from the 17th century that has since been restored; an enigmatic tension arises from the juxtaposition of a light-hungry sculpture by Cy Twombly (b. 1928) and a sketchy 16th-century painting of a pine forest attributed to the renowned artist Unkei, while a surprising ancestry is discovered for Julius Bissier’s (1893–1965) Japanese-inspired ink paintings in elaborately forged Samurai sword ornaments. Japan and the West is a thematic exhibition that explores the notion of ‘aesthetic emptiness’ by comparing objects of traditional Japanese art with selected minimalist artworks from the West. By initiating this ‘dialogue between cultures’, the Kunstmuseum Wolfsburg is making a contribution to the question of a yet-to-be-defined ‘world art’ in a globalized world.

Many of the fundamental driving forces behind the development of modernism since Art Nouveau arose from the opening of Japan to the West in the second half of the 19th century: the bold, flat compositions of Japanese colour woodcuts, the ‘abstract’ expressionism of Japanese calligraphy and last but not least, the functional emptiness of traditional Japanese interiors. When in 1934 the German architect Bruno Taut (1884–1967) stood inside the 17th-century Katsura Villa in Kyoto, he was clearly profoundly impressed by the ‘modern’ simplicity of its interior. This was, as it were, the moment when the Western eye, dazzled by the exotic appeal of japonisme with its brightly coloured woodcuts of erotic everyday scenes, discovered what is arguably Japan’s most enduring contribution to the world history of art and architecture: the beauty of emptiness.

With the development of the Bauhaus movement, modernism in the West had also adopted formal clarity and the tendency towards reduction as guiding aesthetic principles, but modernists such as the architect Walter Gropius (1883–1969) were forced to acknowledge that what they had once extolled as revolutionary discoveries of the new ‘International Style’ already existed in ancient Japanese culture: „Dear Corbu,“ Gropius wrote to his colleague Le Corbusier in 1953, „everything we fought for has its parallels in ancient Japanese culture. … The Japanese house is the best and most modern I have seen…“ The Viennese architect Adolf Loos (1870–1933) conveyed this in somewhat more moderate terms as early as 1927: „Modern architecture is Japanese culture plus European tradition.“

In the 1950s, American artists such as John Cage, Barnett Newman and Ad Reinhardt discovered the sound of silence and painting as a form of depicting nothingness. Artists in Europe combined painting with meditation and came to the conclusion that the future of monochrome, mystical abstraction was not least to be determined in a productive exchange with East Asian painting and Zen philosophy. In Germany, the members of the artists’ group ZEN 49, which includes among others the now 99-year-old painter Rupprecht Geiger, based their programmatic framework on this insight.

But also beyond its spiritual significance, the aesthetics of emptiness was becoming increasingly important in the West. The ground was prepared in the 1960s by Minimal art and its main representatives Donald Judd (1928–1994) and Carl Andre (b. 1935), a movement that was to have a major influence on all the creative disciplines, from design and fashion to stage design. In recent years, the tendency towards minimalism has
increasingly manifested itself as a reliable undercurrent which – for all the arbitrariness of postmodernism – emphasizes the sustainability of the project of modernism and raises the question as to whether the aesthetics of Western modernism is essentially nothing but a continuous approach to the traditional Japanese ‘culture of emptiness’ – of fulfilled emptiness?

This question underlies our current exhibition as a fundamental proposition because, particularly with regard to the global definition of art, the time has come to review modernism on the basis of the Japanese aesthetic of emptiness. With the above-mentioned concept of direct confrontation and a specially devised form of presenting the exhibits, Fulfilled Emptiness hopes to make an unusual contribution to this ‘dialogue between cultures’ – a radical form of presentation that may come as something of a surprise in this particular location. The aura of emptiness presents a striking antithesis to the opulent Pop aesthetic that has characterized previous exhibitions at the Kunstmuseum Wolfsburg. The aim is to provide scope for new ideas and experiences.

For the presentation of these dialogues we have made full use of the specific architectural features of the Kunstmuseum Wolfsburg: the central hall with its floor area of 40 x 40m and height of 16m, combined with a flexible system of movable interior walls, offers ideal display conditions. Visitors are presented with an arrangement of white cubes, most of which can be entered. Initially they will experience a sense of ‘emptiness’ inside these spaces, but after a short period of acclimatization, two or sometimes three objects can be made out, installed directly opposite one another. Barely 10cm deep, a black raku bowl from the 19th century responds, for example, to the silent depths of a „Black Painting“ by Ad Reinhardt, while the intimate confines of a small tearoom – created especially for the exhibition with clay-plastered walls and a floor covering of tatami mats – reveal themselves to a whitewashed vitrine by Joseph Beuys containing two discarded felt suits. The concept of ‘artful poverty’, which is held in high esteem in Eastern culture and is expressed in the wabi-sabi aesthetic, merges with the material spirituality of the West.

These encounters create an arc of tension that also includes the viewer with all his or her senses. Similarity is therefore not aimed at equivalence; it is rather a matter of recognizing the distinctions within the similarities – the distinctions between two cultures that are ultimately built on completely different foundations – in order to discover something about oneself.

With the exhibition Japan and the West: Fulfilled Emptiness, the Kunstmuseum Wolfsburg looks towards redefining modernism in the 21st century.

Exhibition catalogue
Comprehensive information on all the exhibits is provided in the catalogue that has been published to accompany the exhibition; in addition to an introductory essay by Markus Brüderlin, it contains texts by Annelie Lütgens, Stephen Addiss, Adolf Muschg, Ulrich Schneider, Manfred Speidel and Kazuhisa Kawamura.

The creation of a new Zen garden for Wolfsburg, accompanied by an exhibition that combines the concept of ‘meaningful emptiness’ in Zen art with Western Minimalism, mark the beginning of the autumn season and present a striking antithesis to the opulent Pop aesthetic that has characterized the Kunstmuseum Wolfsburg since its opening.

There is a beautiful courtyard in the Kunstmuseum that had almost been forgotten about as it has rarely been put to specific use. Inspired by Peter Schweger’s light-infused architecture with its clear-cut, ‘technoid’ appearance, the new Zen garden that is to be created here will provide a haven of peace and tranquility within the industrial city of Wolfsburg. In the adjoining exhibition space, visitors can immerse themselves in the fascinating world of ‘fulfilled emptiness’, where Japanese art and craft objects such as tea bowls, ikebana, selected items of furniture and a samurai sword are juxtaposed with works of Western art (by James Lee Byars, Agnes Martin and Joseph Beuys amongst others).

The exhibition is presented under the patronage of HE the japanese ambassador in Berlin, Toshiyuki TAKANO, and is supported by Volkswagen Bank.