The blue period. The artist creates ingenious spatial scenarios by juxtaposing kinetic multimedia and video installations with a disturbingly high number of surveillance cameras. Despite the technical sophistication, the devices don't actually work - they only record and transfer to the screens what is to be found within the installation. 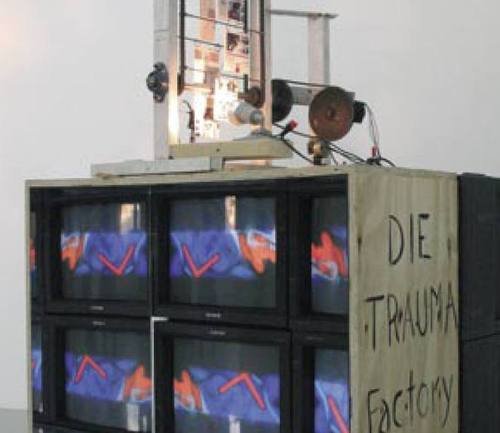 Jon Kessler creates ingenious spatial scenarios by juxtaposing kinetic multimedia and video installations with a disturbingly high number of surveillance cameras. Despite the technical sophistication, the devices don’t actually work – they only record and transfer to the screens what is to be found within the installation. All we see realized here is the backstage, but then, there is nothing in front that could be meaningfully processed.

Kessler displays the entire technical apparatus to us, frustrating any kind of voyeurism by showing that, for the voyeuristic gaze at least, there is nothing to see. The unsettling and reversing of relations between interior and exterior is also characteristic of installations created around 1970 by artists whose work addressed the relationship between architecture and surveillance, especially Bruce Nauman and Dan Graham. One is filmed, sees oneself from behind or with a time lapse somewhere else in the exhibition. Environments whose construction appears simple develop complex relationships between seeing/not-seeing and being observed/being invisible.

Unlike the early installations by Graham and Nauman, in which one is subjected to a kind of test set-up in more or less closed spaces, in the case of Kessler, the viewer is more like someone tagged with an electronic shackle. You can walk around as you please, but the control system always knows where you are. And when we notice a familiar face on one of the screens, we may be just as surprised as if we had seen it on television. We just happened not to know that this friend was also visiting the exhibition at the same time.

Real-time transmission makes us sure the friend really is present in the space. Kessler takes this semblance of reality and renders it absurd. What we see on the screens are newspaper photos, collages, toy soldiers, punched and shaped pieces of sheet metal, puppets hanging on the wall, light refracted through colored transparencies – pictures and three-dimensional arrangements possessing no value in terms of a reality effect.

Kessler’s installations compete neither with actual reality nor with the global power of visual media. As they rattle, gyrate, wobble, or clatter like artillery fire, his apparatuses can hardly constitute an attempt to compete with the technological and strategic might of those responsible for the global distribution of images of terrorism and war.

While the freewheeling motion of Jean Tinguely’s motorized iron sculptures playfully ridicule the functionalism of the machine age as it comes to a close, Kessler’s ramshackle theatrical arrangements can be seen as a grotesque caricature of the global diffusion of stereotypical media images.
Ludwig Seyfarth
Translation by Nicholas Grindell