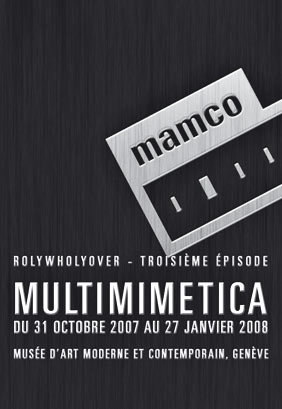 Along with the opening of Multimimetica, the third installment of the exhibition cycle Rolywholyover, Mamco will be showing a fresh face to the world! Thanks to extensive work undertaken this fall in the museum’s second floor, the galleries have been refurbished and resized to allow for larger displays that are better adapted to the collections that take up half the museum’s galleries. Other highlights of this new program include two extensive exhibitions devoted to Victor Burgin and Alain Bublex, which will remain on display until 27 January 2008. Burgin, a British artist and major figure in conceptual art, is presenting for his first large-scale exhibition in Switzerland several series of photographs and videos, including a new work created specifically for Mamco that alludes to both Jorge Luis Borges and Jean-Jacques Rousseau. A former automobile designer who entered the art world in the 1990s, Alain Bublex has mounted his first major solo show with over 60 recent pieces, works that materialize his narratives and utopian construction projects. And filling out the program, Geneva’s print museum, the Cabinet des estampes, is hosting an exhibition on the print work of Robert Morris, a major artist of the American avant-garde. Finally, in conjunction with the recent publication of Black Noise, a work made up of 32 artists’ books in homage to Steven Parrino, visitors can enjoy the original drawings reproduced in this publication, especially on display at Mamco to mark the event.

Alain Bublex (Lyon, 1961) is mounting this winter at Mamco an important show recapitulating his work. Entitled et l’hiver avec lui, the Geneva exhibition gives concrete form to the idea that “a show, before it even exists physically in the space of the museum or gallery, is a work situation on work.” Arranged in seven galleries on the museum’s fourth floor, the exhibition features more than 60 works, including several photo collections (like Plug-in-City, Arrêts soudains or Tentatives), printed works, vehicle or office furniture prototypes (Bob job, Feet First), videos and installations (Glooscap). The artist also plans to return to the museum at regular intervals during the show’s run to update the galleries and installations.

This exhibition is thus presented as “a consequence of this work, moments caught between two periods of work.” Trained as an industrial designer, Bublex, who has collaborated with the French automobile manufacturer Renault, began his career in the plastic arts in the 1990s with an initial series of works called Glooscap, which recounts, using maps, drawings and photographs, the story of an imaginary town that goes by the same name. Fiction has always played an important role in his work, enabling him to bring together as many different times, spaces or worlds as he wants. In the series Plug-in-City, for example, Bublex adds fictional elements (containers, helicopters, landscape features) to his photos of towns and countryside views to make them relate an altogether new story. Bublex’s work also owes a lot to the world of the building site with, for example, the presence of containers repeatedly surfacing in his photographs.

Victor Burgin (Sheffield, 1941), who studied under artists like Robert Morris and Donald Judd, first came to prominence as one of the major figures of Conceptual Art. Since the end of the 1960s, his work has focused on exploring the different possible relationships between word and image, whether through photography or later video. Strongly influenced by psychoanalytical theories, Burgin also incorporated in his artmaking practice during the 1980s a reflection on feminism and questions of identity. At the same time, references to the history of art and film have become increasingly important. In 1993 he did his first video and since then it has been his medium of choice. For over a decade now, he has been developing work that plays on the relationship between fixed and moving images with the creation of photographic panoramas which he then includes in his videos. Besides his work in art, Burgin is a well-known theorist, the author of numerous works on esthetics that have elaborated a true politics of the image.

Regularly invited by Mamco, Geneva’s Cabinet des estampes is presenting in Camera Candida a selection of print works by Robert Morris (Kansas City, 1931), one of the main leaders of the American avant-garde in the 1960s and ‘70s. Without ever becoming his main artistic activity, Morris’s printmaking, a precursor of Minimal Art, enjoys an important place in his research in and reflection on space, memory and language, while always remaining connected with social concerns. The Cabinet des estampes now possesses an almost complete collection of the American artist’s print work; in the show War, Jail, and Death the Cabinet spotlights several series of works that suggest themes related to war, destruction and death. Among the different series on display, we might mention the group of drawings and prints making up In the Realm of the Carceral (dating from 1978 and 1979), whose inspiration springs from a text by Michel Foucault, Discipline and Punish, or, in different register, that of funerary art, the series of eight plates that form Tombs and Cenotaphs (1980).

Besides these three monographic shows, Mamco is presenting a collection of original drawings published in Black Noise (presses du réel), a series of 32 artists’ books created as a homage to Steven Parrino and produced by John M Armleder, Amy Granat and Maï-Thu Perret. Linked to Parrino (1958 – 2005) through projects, exchanges, friendship, or reciprocal inspiration, each of the artists invited to take part in this collective undertaking produced one volume of the publication, all of which are brought together in a boxed set. The show featuring these drawings follows on the in-depth retrospective that Mamco devoted to Parrino in 2006 (Steven Parrino, Retrospective 1977-2004). Finally, to conclude this rich and varied program, the museum is highlighting a vast reorganization of its collections on its first and third floors (Autumn-Winter Collections), following the makeover of these spaces.