DATAmatic 880. The installation functions as a computer lab in which scientists examine the artist's body. The artist's body undergoes different tests to determine if it's in the position to withstand an experiment of reverse time travel. The next phase will be a performance in reverse aging. 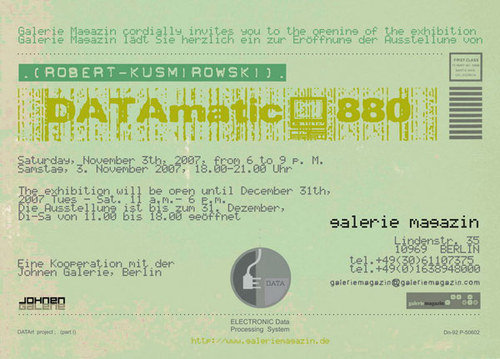 Robert Kuśmirowski - the artist, who, at the Berlin Biennale in 2006, built a wagon made of cardboard and polystyrene and installed it in the Jewish school for girls, once again takes us back in time. This time, he has built a computer lab from the 1960's. "DATAmatic" is the name of a company which built a legendary computer in the US in 1959. The "DATAmatic 1000" occupied a whole room and was used for mathematical calculations. "DATAmatic 880" never existed but now, 50 years after "DATAmatic 100", it was invented and constructed by Robert Kuśmirowski

The exhibition "DATAmatic 880" is the first in a long series of work. The installation in Berlin functions as a computer lab in which scientists examine the artist's body. The artist's body undergoes different tests to determine if it's in the position to withstand an experiment of reverse time travel. The next phase will be a performance in reverse aging. Kuśmirowski will succeed in doing what no one has achieved before. The 34-year old artist, who has achieved success and has participated in important exhibitions, will return to the time when he was 25 years old, had just completed his studies in Lublin and was completely unknown as an artist. At that time - in 2002 - he had his first exhibition. In the hall of the university, he exhibited a collection of drawings of different objects such as an old newspaper, a package of cigarettes, the label from a package of cheese. It is to this period that the artist returns after the experiment. All his earlier works are created again and the exhibit takes place as if the prior one never existed. The artist is not conscious of the fact that somebody has already planned his career and begins his work anew. He is not aware, however, of what is waiting for him. The effects of the experiment will be examined at an exhibition in Dhont Dhaenens Museum in Belgium.

Kuśmirowski, independent of whether he is a time-traveller from the 19 th century, an alchemist or scientist, he always transforms himself into the role of a discoverer and technological pioneer. Usually, he travels back 100 or 200 years. He reconstructs an instrumentarium from the past, so that we as his audience believe in the power of science. Simultaneously, he introduces an element of fiction. He invents objects, which never existed or which have no purpose. We never know what is real and what is invented.

For the present exhibition, Kusmirowski moves back only 40-50 years. He constructs a computer lab from the late 50s/early 60s. His "latest" computer research is also a trip into an unknown sphere of knowledge like a flight into space or diving 20.000 miles under the sea . From a functional point of view, the computer lab does not differ from the alchemistic lab of Dr. Vernier ( Ornamente der Anatomie Kunstverein Hamburg, 2006). The theme of Kusmirowski's work is belief in the power of the human being, in the strength of one's own will as well as the transgression of the borders of mind and body. Every industrial revolution is, for him, a fulfillment of utopia.

Belief in the power of science, a belief which is equally strong as it is deceptive, bears romantic characteristics such as the conviction of the possibilities or finding ways to change the world into a better place.

The artist moves back into the traditional studio yet simultaneously operates with an open artificiality . He creates a fictitious narrative and simulates reality with such credibility that the viewer is overwhelmed not only by the object, but with its similarity - simulacrum. The artist always turns his eye to the viewer, leaving some element that de-masks the fiction, as if to say this "reality" is not real.

Kusmirowski's work is manual. He does not use machines, which would be obvious in this case. Instead, he uses his own mind and soul, which speak through his body. When the artist built installations reflecting the period of 100 years ago, the work was more straightforward. Kusmirowski is now crossing into more dangerous territory. Nobody has ever built a computer by hand. But Kusmirowski is known as a brilliant faker as he is able to copy each object - from documents to whole installations that cross time. Everything which is old, for him, is more beautiful than new. ?In the past, even an ordinary bureaucratic letter looked beautiful," says Kusmirowski. It is the passage of time which gives an object character. Kusmirowski tries to catch, to manipulate and to master time. This is why he travels into the past.

For Kusmirowski time is insignificant, which allowes him to manipulate it freely. He travelled back 80 years, to a bicycle-tour that took place from Paris via Luxembourg to Leipzig. He rode a bicycle from 1926 in clothes from that period. On his time travels, he never travels alone, but also takes along his audience. For the exhibition in the Potocka Gallery in Krakow, he created a photo studio, in which he photographed his friends at the turn of the century.

A journey 50 years back in time is a journey back to that moment, when the computer as an adding machine changed into an analytical machine. For the first time, the following words were uttered: "In the near future, this machine will replace the human being..."