The title of this solo show, Yellowcake, refers to the technical term denoting a concentrated form of uranium which, when enriched, may be used to make nuclear weapons. The exhbition consists of a series of 9 photographs about the location where a gun story about uranium is originated. 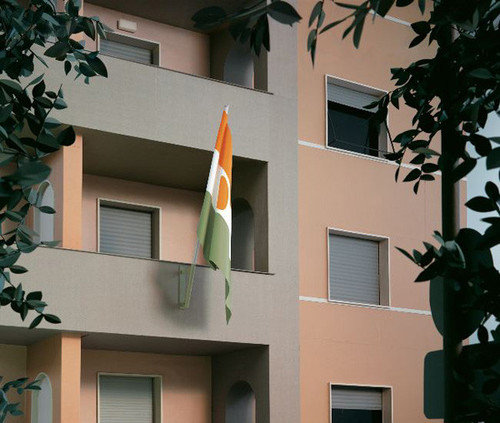 303 Gallery is pleased to present our fourth exhibition of work by Thomas Demand. The title Yellowcake refers to the technical term denoting a concentrated form of uranium which, when enriched, may be used to make nuclear weapons. This word was recently on the public’s mind as the fulcrum that President George W. Bush used in his 2003 State of the Union Address when he stated: “The British government has learned that Saddam Hussein recently sought significant quantities of Uranium in Africa”. The evidence for this accusation was a paper trail purportedly stolen from the Embassy of the Republic of Niger, in Rome, and then given to both the British MI6 and American CIA by SISMI -- Italian intelligence counterpart. The documents were an apparent contract of sale for hundreds of tons of ‘yellowcake’ by Niger to the Iraqi authorities. As the events making up this story unraveled, it became clear that the ‘evidence’ and information passed along by SISMI were obvious forgeries.

Yellowcake consists of a series of 9 photographs about the location where this story, and its ‘smoking gun’ originated. Adding further intrigue to this saga, is the consideration that there has never been any photographic documentation that could illustrate these events and news as they came to light -- no one had gained access to Niger’s Embassy in Rome. For Yellowcake, Demand –who has traditionally based his practice on existent imagery – had to access the source site on his own. Demand entered the apartment-cum-embassy and conversed with the embassy staff, and through these visits and interactions built his own memory of the place. Based on these recollections, Demand reconstructed the embassy site in his studio in order to create the images that make up Yellowcake.

Thomas Demand had a mid-career retrospective at the Museum of Modern Art in New York in 2005. Since then he has had solo exhibitions at The Serpentine Gallery, London, The Irish Museum of Modern Art, Dublin, and most recently in June of 2007 at the Fondazione Prade, Isola San Giorgio in Venice, Italy. Catalogues are available from each of these exhibitions. Demand participated in Shanghai Biennale, China in 2006, La Biennale, Venice, Italy in 2005, and represented Germany in the Sau Paulo Biennale, Brazil in 2004. The artist will be participating in a discussion series organized by the American Academy in Berlin that takes place at Carnegie Hall on November 4th, 2007.