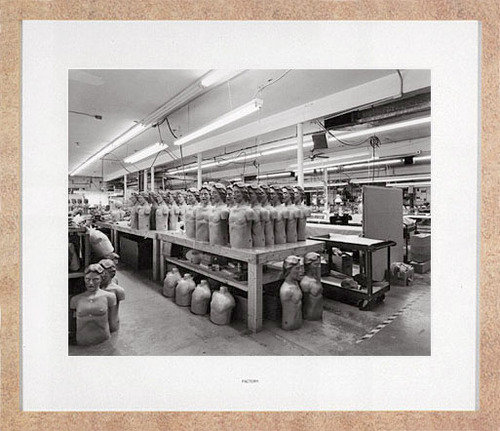 HASTED HUNT is pleased to announce LYNNE COHEN, "Camouflage", large format black and white photographs of interior spaces made over the past 30 years. None of this work has been exhibited in the US.

Cohen is dealing with the concept of camouflage ironically, as in hidden or deceptive, from camoufler to disguise. These are clear-eyed images of interior spaces, empty of people and seemingly affectless. These are familiar spaces, mostly rooms, but also offices, lobbies, and hallways. But there is always something very strange or disorienting.

Much contemporary photo-based work deals with "constructed" realities but Cohen's settings are straightforward. They are what they are, even when they seem abstracted. This approach is closer to Ed Ruscha than Thomas Demand.

In her searching out of locations she likens herself to a performance artist, as she says, "because of what I have to do to get access. What I am looking for is something political or conceptual, something incongruous or pathetic, a certain sense of strangeness, incoherence, sadness or an asphyxiating order".

Cohen brings a subversive edge to the work, "There is usually something absurd or funny to counterbalance the critique. That is very important to me and I hope the humor enriches the work without masking the critical".

Internationally in the past two years Cohen has been in museum shows in France (Paris), Germany (Frankfurt), Spain (Valencia), Austria (Vienna) and Greece (Athens and Thessalonica) as well as Canada (Toronto, Alberta and the current Biennial in Montreal). Her work is included the collections of most major museums including New York's Metropolitan Museum of Art and Museum of Modern Art.

"Camouflage" was initially presented last year at Carleton University Art Gallery in Ottawa and was accompanied by a catalogue (Le Point du Jour Editeur 2005). She lives and works in Montreal. This is the artist's second solo show with Hasted Hunt following her gallery debut in 2006 with color work, "Mixed Messages".