Paris-New York-Shanghai. Photography. The work reveals stunning similarities between the three cities. The exhibition coincides with the release of his critically acclaimed book. 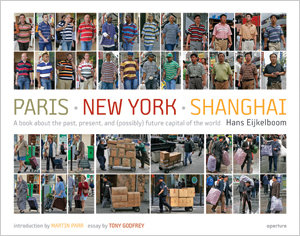 For the past fifteen years, Hans Eijkelboom has been creating a clever and witty study of three major cities, selected for having been (or promising to be) the cultural capital of its time. His deadpan, note-taking process, which is in line with the works of Ed Ruscha, Joseph Kosuth, and Hans-Peter Feldman, depicts modern city life in a series of ingenious snapshot-style grids, which enable the viewer to compare simultaneously the three photographic studies of each metropolis and its citizens.

The work reveals stunning similarities between the three cities. As Eijkelboom writes in the accompanying book of the same title, “Globalization, combined with the desire of cities for visually spectacular elements, is leading to the appearance everywhere of city centers that look the same and where identical products are sold.”