The Killing Machine & Other Stories 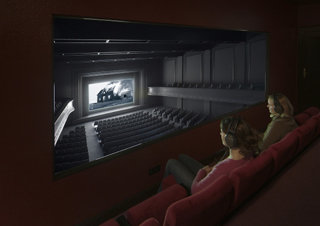 The Killing Machine & Other Stories

Through multi-media installations described as everything from “physical cinema” to “audio sculptures,” Canadian artists Janet Cardiff and George Bures Miller entice participants into alternate realities through the use of sound and voice. Janet Cardiff and George Bures Miller: The Killing Machine and Other Stories 1995-2007 presents ten installations that weave together independent but complimentary experiences.

Each piece imposes its own time and rhythm, uniting live theater and film, producing stories that live side by side in time. The exhibition will be presented in two separate venues, MAM at 101 West Flagler Street and Freedom Tower, 600 Biscayne Boulevard. The Freedom Tower venue will feature Cardiff’s Forty Part Motet, based on the 16th-century choral piece Spem in Alium by Thomas Tallis. One of the installations on view at MAM will be the The Paradise Institute, 2001, which was created for the Canadian Pavilion of that year’s Venice Biennial and won both the Biennale di Venezia Special Award and the Benesse Prize.