Photography show. Tatiana Lecomte, Ernst Logars, Leo Fabrizio, David Adam and Daniel & Geo Fuchs. In the five collected contributions the question of historical inscription is asked in places and landscapes -and with it connecting their social and political meaning. 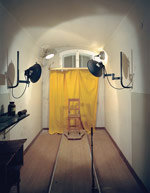 In the five collected contributions the question of historical inscription is asked in places and landscapes –and with it connecting their social and political meaning. In this manner individual phenomena are rather excluded and a collective consciousness to the place and its history is brought up for discussion. Tatiana Lecomte, as well as Ernst Logar in their work concerns themselves with the events of the National Socialism in Austria.

Since 2005 Tatiana Lecomte examines landscapes in direct proximity to former concentration camps and asks the question about the represent ability of the transgression to possibly make the once non-visible visible and a possible complicity of the landscape. In her new work Cement, 2006 she takes a radical step: Visualization through destruction.

In Ernst Logars work Feliferhof, 2004 stands the landscape in discourse with investigation and documentation efforts of a former K.& K., later NS and today used by the Austrian Army, firing range which served during 1941-45 as a place of execution by firing squad and where the corpses were buried in a mass grave. How does one go on and deal with such a place and its oppressive history? Cause for Logar’ s special interest, was the recent revelation of the murder of his grandfather at the Feliferhof.

Another kind of historical revelation is the center of attention with Leo Fabrizio. The history of Switzerland - its democracy, independence of many years and neutrality – the Swiss are bound to an oath to defend and to protect these values as well as shelter - to furnish bunkers. Fabrizios series Bunkers, 1999-2004 focuses particularly on the military bunkers. Almost a quest game camouflaged in an almost theatrical way he merges the landscape with local-typical buildings in a way that renders them almost unrecognizable.

In the contributions of David Adam and Daniel & Geo Fuchs they deal with the recent history of Germany focusing on the former DDR. These artists bring the strange and oppressing to light. In the work Belohnungsraum, 2003 David Adam illuminates a usual means of control in the former DDR – the spying. Prisoners were rewarded for days or even weeks for their spying activities by being accommodated in so called better prison conditions. The spaces rather resembled hotel rooms with comfort than prison cells. Adam amalgamates this historical component with views of contemporary spaces creating a kind of advertising campaign for the „reward areas “.

Daniel & Geo Fuchs have worked since 2004 on the project STASI - secret rooms, in which they photograph, 15 years after the fall of the wall, rooms and places of the Ministry for Public Security of the former DDR. The perfect, central perspective effect of the camera and detached photographed areas, which to date no one has been able to see, are oppressive and leaves one sensing the extent of the DDR power apparatus. Indications and symbols of ruthless pursuit, and suppression, of power, and powerlessness are archived here.