A retrospective. An important works series will be gathered in close co-operation with the Belgian artist now aged 80: paintings, drawings, engravings and books illustrations will be selected in national and international collections. A labyrinthine journey through the artist's chosen themes, evoking work that has been underway for more than 60 years. 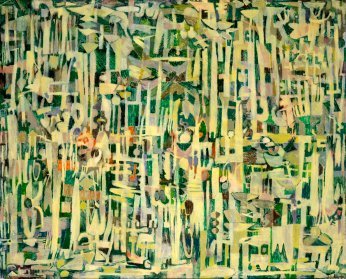 This exhibition will constitute a retrospective and labyrinthine journey through the artist’s chosen themes, evoking work that has been underway for more than 60 years. Baluchon et ricochets, one of the books on Pierre Alechinsky published by Gallimard, draws attention to this method of developing images and ideas through rebound, transformation and mutation. Our exhibition will also show the diversity of technique: oil, ink and acrylic paintings (sometimes monumental: Alveoli, The Days Are Getting Longer), drawings (sometimes very large: Commissions and Colloquies, The Travelling Paintbrush) right up to the “infeuilletables” (books made of enamelled stone or porcelain).

At the entrance to the Museum of Modern Art, in homage to his father (who went to the Crimea in the 1920s and became a doctor in Brussels), we will discover Black Sea, an allusive work that represents an invitation to travel. Then, in the access corridor, we will exhibit a selection of original lithographic posters. The explanation willingly given by the artist: “I am a painter who came from [the art of] printing”.

We will reproduce an enlarged version of his signature on the wall in the reception, one traced by the right hand and the other, reversed, by the left hand, to draw attention to a fundamental fact: Alechinsky is a thwarted left-hander. Thus when we see the engravings alongside their copper plates we will finally understand the initial role of printing – an “Alice’s looking glass’” – in the daily life of a man who writes with his right hand and paints with his left.

The series of etchings, Bites 1962 (made using the lavender oil process) and the 1968 series of drawings, Source of Information, represent the culmination of observation and studies “from models” of orange peel (Orange Peel), seeds, roots, shells and pebbles; a graphic vocabulary, nourished by reality, that traverses almost his entire oeuvre.

The exhibition will bring early paintings to light, which have not been exhibited since 1947, the year of the first exhibition in Brussels at Lou Cosyn’s gallery. The gouaches and lithographs created at the Marais workshops in Brussels from 1949 to 1951 will reveal Alechinsky’s active participation in the CoBrA movement.

He emphasises, “Cobra was my school”. Compared to Karel Appel, Christian Dotremont and Asger Jorn amongst others, he was one of the youngest participants in the movement. In our epoch when excessive technology risks jeopardising that which is handmade, indeed the human touch, Cobra was in effect a simple, but not simplistic, “database” of which spontaneity was one of the reagents. Alechinsky never stopped developing the spirit of this in his drawings, paintings and writings.

The layout of the exhibition will be composed of groups of significant works, like The High Grass 1951 (Coll. Museo Reina Sofia, Madrid), a work that preceded the end of Cobra and Alechinsky’s departure to Paris.

Initially he perfected his engraving technique at Atelier 17, under the guidance of a master: Stanley William Hayter. We will exhibit an engraving from 1952: Something of a World, that signalled his interest in a sort of graphology “above that of handwriting”, which is to say in the handwriting that is within drawing, painting and engraving. During the early 1950s he became the Paris correspondent for the Japanese journal Bokubi (the joy of ink), then in 1955, encouraged by Henri Storck and Luc de Heusch, he left for Japan with Micky, his wife. He exhibited Night, 1952 (Ohara Museum, Kurashiki) and made a film: Japanese Calligraphy – Christian Dotremont would write the commentary with music by André Souris.

A publication under the redaction of Michel Draguet, Director general, will accompany the exhibition of which Anne Adriaens-Pannier, acting head of Department, will be the commissar.