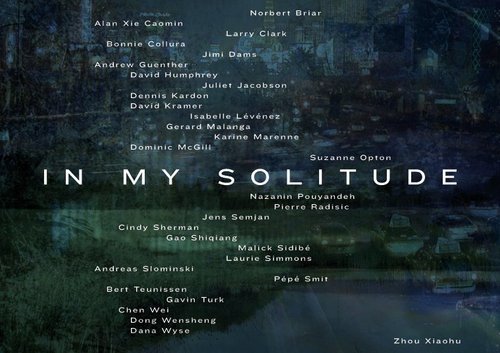 In a society in which people are connected to one another like never before in the history of mankind, does the term “solitude” still have any meaning? The works in this exhibition do not attempt to answer this question, but each one provides in its own way some reflections on the uniqueness of the human being, his conflicting or complicit relations with others and with the world: “Solitude lies at the lowest depth of the human condition. Man is the only being who feels alone and the only one who is searching for the Other” (O. Paz).

For her “Soldiers” series, Suzan Opton photographed American soldiers back from Afghanistan. The photos are identified by a name and the number of days spent at the front: each individual is unique, just as the experience of one is not the same as that of the other. War seems to be continuing behind the open or shut eyes of these faces shown in close-up, resting on the ground. All the armies in the world can glorify the solidarity between soldiers as much as they want: the result is always a little more solitude.

The best Hollywood films on the subject developed this paradox to absurd lengths, from the “Deer Hunter” to “Full Metal Jacket”, which Jens Semjan revisits with “Vietnam, The Movie”, a symbolic scene – or rather scenes, since this is a collage halfway between animated and fixed images. With its panoramic format, the image also refers to the history of art and to “war paintings”, a genre that has now been replaced by the cinema, and which bears witness to the morbid fascination which war has always wrought on the general public, regardless of era.

This attraction to death is also a feature in the passage into adulthood, as Larry Clark has illustrated in his series “Dead”. With “Teenage Lust”, he studies the apparent insouciance of teenagers in their discovery of sex and drugs. These images must be looked at in the wider context of his work which depicts the frantic quest to belong to a group at this time of life. Clark’s images have often led to controversy since his models are children.

Dennis Kardon seems to enjoy these politically correct controversies by playing with the proportions of his characters (“Pop Quiz”, 2005), causing some unease in the spectator. The disturbing element in David Kramer’s paintings emerges from the jumbling together of erotic and pornographic images (young women, always alone) and the accompanying texts, which never describes them. His approach is rather reminiscent of that of Nazanin Pouyandeh, whose iconography is inspired by large hand-painted cinema posters and large propaganda portraits on the façades of buildings in Tehran: “Each character has his own experience and is confronted with the others by juxtaposition. It is the composition rather than the situation which creates the conflict. These worried individuals are witnesses of an event which is not revealed. I play all the time with associations of the spontaneous and naïve ideas of spectators. I use elements from the real world, but it is not the real world I am trying to paint. All that is left is a murmur from it.” David Humphrey’s compositions are also based on juxtaposition: according to history, Dwight Eisenhower started to paint (a solitary pastime if ever there was one) on the advice of Churchill ... but his paintings, marked by the “pathologically normal” syndrome, are also the reflection of a certain kind of ideology. By copying them and then changing them in his “Ike and Me” series, Humphrey invites the spectator to look for links between the banality of the subjects and the dominant social structures which dictated them.

Andrew Guenther feels that rampant consumerism is one such structure: his compositions evoke the change in status of ordinary consumer items – for instance cheap sunglasses – once they leave the shop shelf and arrive in the everyday world. They become “just as strange” for the artist as the people who wear them – consumers. Alan Xie Caomin’s paintings deal indirectly with the same subject: images drawn from various media, in particular from television and the Internet, the main vectors of commercial advertising – are combined in the more traditional medium of painting to create disembodied individuals, captured in a world they no longer control but which controls them. The worldwide web witnesses the encounter and clash of many different cultural references, like the sculptures of Bonnie Collura, who mixes Mickey Mouse and Greek mythology, the Italian Renaissance and fairy tales. The Internet era is also the era of multiple fictional identities: “ through bilocation fantasies meet, bodies meet and become lovers, birthing the self”, writes Juliet Jacobson, whose work is in fact based precisely on this rough and tumble.

Both Jim Shaw and Jimi Dams introduce distortions into their compositions that evoke problems of perception or dreams. It is more a question of dreamlike extrapolation in the work of Dominic Mc Gill, who combines fragments of reality and imagination.

In his recent videos, Gao Shiqiang questions the status of the individual in his relationship with the community, in the context of the huge changes in contemporary China, an approach that can also be perceived in the photographs of Chen Wei and Dong Wensheng. The work of the latter points to the obvious influence of traditional Chinese painting combined with reflections on the development of individuals in the specific context of a given environment. As for Zhou Xiahou, his animated film takes the two extremities of a love affair and focuses on a single image and a single body, with the man and woman meeting and clashing; the conflict is depicted lightly and humorously. The same could be said of Karine Marenne’s video, an integral part of her “Caravan of Love” project: this moving and living sculpture deals humorously with topics relating to femininity and couples. For instance is not the radiant woman at home alone with her sophisticated domestic appliances sheltered from the blues and from her fantasies?

Stereotypes linked to femininity are also at the heart of the work of Pépé Smit, as can be seen from her self-portrait using make-up in a modern, contemporary art museum.

Gerard Malanga’s photographs speak of the solitude of their models, caught in their full glory: Andy Warhol, Iggy Pop, William Burrough, but above all Edie Sedgwick, alone in the Photomaton cabin. For Norbert Briar, however, the anonymity of those in the portraits matches that of the décor, chosen precisely for its ordinariness. While their solitude seems total, the game of seduction that these young girls play with the photographer brings them amazingly close to the spectator. The “domestic landscapes” which Bert Teunissen has produced in various countries (Belgium, the Netherlands, Japan, etc.que, Pays-Bas, Japan, etc.) also praise the ordinary, but here the décor reflects the personality of the models down to the smallest detail. In the portraits by Malick Sidibé, each model’s special features are indicated by their possessions: clothes, portable radios or motorbikes – a principle which Cindy Sherman delights in distorting in her “bus riders” series where she disguises herself and embodies each “model” in turn. Lastly, there are the “intimate panoramas” and “portraits of emotions” in the photographs of Isabelle Lévénez, such as her self-portrait entitled “Narcisse”. This description could just as well apply to mages of a quite different type, the “Pornscapes” of Pierre Radisic.

A doll’s house furnished by big designers (Ron Arad, Karim Raschid, Jasper Morrisson, Le Corbusier, etc.) and decorated by very typical contemporary works (Allan McCollum, Barbara Kruger, etc.), the “Kaleidoscope House” by Laurie Simmons (available in shops in a simple version) recounts in a play the solitude of this family condemned to live in a décor designed for it – to the extent that even the children’s toys consist of rare, expensive items. A kind of golden cage, contrary to the traps tirelessly produced by Andreas Slominski, which are allusions to the seductive, disappointing nature of art, and which reveal everything about their imprisoning function.

There is no doubt that Gavin Turk is better known in the world of contemporary art than Ian Rank-Broadley. Yet the latter’s works - effigies of Queen Elizabeth for the United Kingdom Mint – are seen by millions of English people every day. However, it is Turk, who has produced only five examples of one of these coins in solid bronze, fifty centimetres in diameter, whose name is remembered. If this injustice, and the solitude of the great misunderstood artist, should weight too heavily on the shoulders of Rank-Broadley, there is one solution: take Dana Wyse’s “Accept That You're Absolutely Alone” pill.