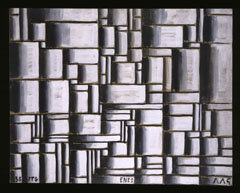 This exhibition presents some two hundred works by Latin American artists that have been added to the collection over the past ten years. The works on view embrace several artistic mediums and comprises a variety of styles, from early modernism and geometric abstraction to informalism and conceptual art.

The exhibition is organized by Luis Pérez-Oramas, The Estrellita Brodsky Curator of Latin American Art.

The exhibition is made possible by Kathy and Richard S. Fuld, Jr., with additional support from the Friends of Contemporary Drawing of The Museum of Modern Art.