The Web2.0 phenomenon. Web2.0 stands for power to the user and democracy for everyone. It has led to innovative forms of media use in which open and friendly cooperation stimulates critical reflection and new ideas. How are artists reacting to this democratization process? To what extent does the democratic movement in Web 2.0 differ from previous utopias around radio and television? 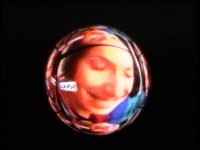 Video Vortex.2 is a sequel to the Video Vortex exhibition that responded to the Web2.0 phenomenon. Web2.0 stands for power to the user and democracy for everyone. It has led to innovative forms of media use in which open and friendly cooperation stimulates critical reflection and new ideas. In Video Vortex.2 attention is given to a different side of the democratic movement. How are artists reacting to this democratization process? To what extent does the democratic movement in Web 2.0 differ from previous utopias around radio and television? How can artists retain their autonomy and diversity outside the mass media? Is the esthetic of amateurism the new genre? Once again, artists will be responding to Web2.0, with special attention this time being given to the situation in The Netherlands and Belgium.

Growing out of the desire to do one's own things in a space one annexed for oneself, in the early 1980s various initiatives arose in Amsterdam that focused on making and exhibiting images and sound. Art, politics and media came together for the first time. Alas, it was not long before the coherence and mutual solidarity were lost, but the tone had been set and a great deal of effort had been put into dynamic and socially and culturally subversive radio and television broadcasts. Both Rabotnik and Meta.Live.Nu presents DFM RTV INT http://meta.live.nu will be showing things which were made during those years. In the presentation the emphasis will be on the significance of these media initiatives for the internet today and what they could mean for those making idiosyncratic productions now. Rabotnik goes online, making its archives accessible and shwoing will be showing things which were made during those years. The experimental virtual lab Meta.Live.Nu takes us with an interactive installation concept through the metaverse Second Life to DFM RTV INT. (http://dfm.nu/) DFM RTV INT is the first 24/7 online station runned by media-artsist themselves. The unsubsidized and noncommercial DFM RTV INT exchanges and broadcasts old and new material from various independent vision and sound artists.

PARK4DTV, established later and known for its slogan “TAPE THIS! STEAL THIS!”, also opens its archives in the PARK4DDD (Digitale Data Dump) 1991-2007. Any visitor to Video Vortex can copy texts, short films, codes, pictures and audio from PARK to a USB stick there, on the spot. PARK4DTV is an artists' initiative which has been distributing Pure Image and Sound for every imaginable sort of screen since 1991. See http://www.park.nl/4ddd

The You-Tube-o-thèque, designed by Johan Grimonprez and Charlotte Léouzon, is a sort of television playing a program improvised with films from YouTube, Podcasts, online television, mobile telephones, Ipod video, blogs and other sources. The films are selected on the basis of events surrounding 9/11. The You-Tube-o-thèque is a unruly contemporary podium.

Martin Takken makes use of the do-it-yourself principle that is increasingly popular, both on the internet and in exhibitions. His Es Ist Ein Gesamtkunstwerk concept is a collective, constantly changing artwork that is made by international artists. Every day a different selection of colors is available, the kind of brush changes every hour, and various rules imposing limits or creating new possibilities are introduced and modified at random moments. Each day's results are stored in the archive and can be purchased for 25 euro, but you can also make a print for yourself. http://www.gesamtkunstwerk.nl/

In his work Video as a Suburban Condition Martijn Hendriks investigates the relation between what is socially conceivable and our experience of urban public space. Using found videos from YouTube and comparable internet sites he shows how people deal with their immediate environment. Against a background of parking places, gardens, roofs and shopping centers people reveal themselves to others. Video as Suburban Condition repeats a cycle of actions and imitations, as the most banal surroundings become the stage for the most exceptional actions. http://www.martijnhendriks.com/

New tools such as wireless and mobile telephones outfitted with photo and video cameras afford new ways of working, in which the process is more important than the end product and the content is created only through unstable netwerk platforms. The work MythEngine by Nancy Mauro-Flude is a good example of this. MythEngine is a webcast that transmits live video and stills. Referring to our compulsion to tell stories, MythEngine shows how over time, with the rise of digital photography and video, our collective memory is increasingly becoming a database. http://sistero.sysx.org/verbo/index.html

Thomson & Craighead present their desktop documentary Flat Earth. Using fragments from existing blogs, Flat Earth takes the viewer around the world in seven minutes. An individual discourse is created by weaving the fragments to, through and over one another. http://www.thomson-craighead.net/docs/flat_earth.html

The mobile telephone is one of the first electronic objects that large numbers of people have personalized with sound. The 'ringtone' has become a familiar personal insignia. For both composers and users it provides a unique opportunity to do something with sound. The mission of Sonic()bject is to take advantage of this common interest and to let users become acquainted with never previously heard and experimental sound. The artists that Sonic()bject has selected for devising new sounds and ringtone compositions are professionals from all over the world who are involved in creating with sound: audio designers, audio artists, contemporary composers, classic or electro, jazz, pop ... real “sonic objects” that have their roots in the history of auditory art. Tones or melodies, instrumental, noise or pure vibrations, recorded or synthetic, these sounds all have a strong auditory character and are make for 'calling'. The ringtones can easily be downloaded from the website. Sonic()bject was set up by Antoine Schmitt and Adrian Johnson.
http://www.sonicobject.com

Oog Volkskrant online is an op-ed podium and part of the online edition of the Volkskrant. Oog (Eye) asks audiovisual artists to share their views on the news and current events, and on the role, function and composition of the news and current events. In this way artists can take on the role of opinion makers in a news environment. Oog began in September, 2005, and each week shows the work of a different artist. After that, the work can be found in the accompanying archive. Nanette Hoogslag, Oog's initiator and curator, has made a selection from the archive especially for Video Vortex.2. The works are shown via an interface specially developed by Joes Koppers and Bente van Bourgondiën. With work by De Ruimte designers, Han Hoogerbrugge, Max Kisman, Michael Takeo Magruder, Jody Zellen, Bik van der Pol, PJ Roggeband & VJ Hummer, jimpunk, Motomichi Nakamura, Carolien Hermans, Marjolijn Ruyg and Willem van Weelden, Babette Wagenvoort, Berend Strik, Jeroen Kooijmans, eddie d, De Geuzen, Studio Frank & Lisa, Lust and others. Oog Volkskrant online: http://extra.volkskrant.nl/oog/

During the opening on December 7, at 6:15 p.m.
Video Response by Constant Dullaart
Constant Dullaart makes a selection from his archive, and in 30 minutes, using visual rhyming, reveals not only the democratization of video as a medium, but also of authorship. In short, 30 minutes of videos from artists, advertising agencies and lots of amateurs. http://www.constantdullaart.nl/

Video Vortex Workspace
In the Workspace everyone can get acquainted with open and free software (FLOSS, in collaboration with Derek Holzer), Vlogging (under the guidance of Seth Keen), network mapping (Govcom.org), take part in the Furtherfield Visitors Studio and more. See the website for the latest program.

Video Vortex is a collaboration among the Netherlands Media Art Institute, the Institute of Network Cultures and Argos, Brussels.