A comprehensive exploration of designer's life, work and ideas, the exhibition covers his early career as a blacksmith in Nancy, France, the establishment of his own factory in the 1930s producing metal components and structures, and his later work as a consultant engineer. 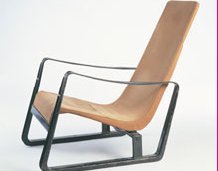 Jean Prouvé (1901-1984) was a great genius of 20th Century French design. As much a part of quintessential French style as the Michelin man and the Citroen 2CV, he worked both as a designer and manufacturer, producing everything from bicycles for the French resistance to folded sheet steel armchairs and prefabricated housing. Prouvé was a pioneering architect, and without him modern architecture would be very different. Not only did he invent High Tech design, but he was responsible for the selection of Richard Rogers and Renzo Piano to build the Pompidou Centre in Paris in his role as President of the competition jury. Jean Prouvé at the Design Museum from 7 December 2007 to 25 March 2008 will be the first showing of his work in the UK.

A comprehensive exploration of Prouvé’s life, work and ideas, the exhibition will cover his early career as a blacksmith in Nancy, France, the establishment of his own factory in the 1930s producing metal components and structures, and his later work as a consultant engineer. The exhibition will demonstrate Prouvé’s love and understanding of his chosen material – metal – and his central role in the design and development of metal in the mass production of both furniture and buildings in the 20th century. Full-scale architectural structures will be displayed alongside architectural models, drawings, photographs, film, and over 50 examples of Prouvé’s furniture design. Prouvé died in 1984 having championed and produced practical solutions to the industrial production of architecture and design. His designs are valued today for their fluid, functional beauty, and are much sought after by collectors, but Prouvé is also admired for his drive to develop, not only the aesthetic possibilities of aluminium and steel but also their economic and social applications.

Richard Rogers said: “It is wonderful that the Design Museum is holding an exhibition of Jean Prouvé’s work. Prouvé was a pioneer in linking the process of construction to the language of modern architecture. His constant research into the nature of materials, production, form and design has greatly influenced my work.”

This exhibition was originated by the Vitra Design Museum, Weil am Rhein, Germany in cooperation with Deutsches Architektur Museum, Frankfurt and Design Museum Akihabara, Japan. The exhibition has been re-designed for the Design Museum.