Irrlicht is a room-filling installation where painting and sculpture are fused. Areas of light and shadow alternate and build up a multilayer and convoluted space, and the motives (an entanglement of scaffolds, trees, branches, backings etc.) are cut out of the boards just like silhouettes. 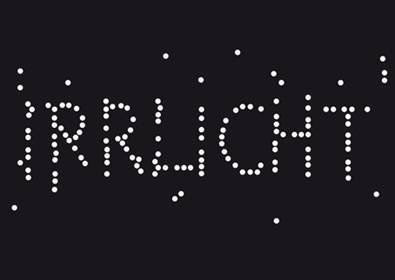 The room-filling installation „Irrlicht“ (ghost light) follows up formally to Pfeiffer’s previous works such as „Backdrop“, which was realised at the Galerie Pankow in April/May and as a part of the Housetrip show at Berlin’s Artforum 2007. With „Irrlicht“, materiality and arrangement of single elements are amplified, pushed forward and carried to extremes. Painting and sculpture are fused.

Pfeiffer has painted 11 HDF boards, cut out outlines and arranged them consecutively in the spatial depth, thus creating a mazy room of illusion. The motives (an entanglement of scaffolds, trees, branches, backings etc.) are cut out of the boards just like silhouettes. They overlap and offer exciting perspectives. Areas of light and shadow alternate and build up a multilayer and convoluted „pictorial space“. This game between light and shadow and the translucence of different light sources present the backround for the title of the work.

With „Irrlicht“ formal analogies can be considered to stages for raree shows and especially to perspective dioramas, as have been popular in the 19th century. Mocks and temporary architecture, which can be found at filmsets but also in regular street scenes, present further references of the installation. Some themes that appear in Irrlicht derive from the filmset of Fritz Lang’s famous film adaption of the Nibelungenlied from 1924.