Ruby Osorio's latest works delve into the interplay between mischief, myth, and art, focusing on the long-standing archetype of the trickster in Greek mythology and other cultures. Yuh-Shioh Wong's installation, entitled The Marsupial Project, takes its cues from the marsupial pouch: a space that is both an inside and an outside. 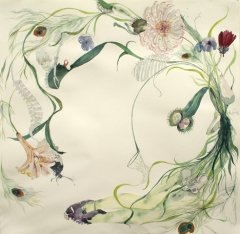 Ruby Osorio
Looking Through the Blind

Ruby Osorio's latest works delve into the interplay between mischief, myth, and art. Following upon her recent solo show in Athens, Greece, Osorio focuses on the long-standing archetype of the trickster in Greek mythology and other cultures. As Lewis Hyde states in his book, Trickster Makes This World, "Trickster is the mythic embodiment of ambiguity and ambivalence, doubleness and duplicity, contradiction and paradox." It is in this ability to hold contradictory positions that artistic renewal occurs. New possibilities also emerge for Osorio's idiosyncratic language of thought and unreasoning. Employing a preparatory process of collage and improvisation, Osorio reorders the meaning of signs and signifiers taken out of their original context to raise more questions than can be answered at first glance of one of her paintings. Encoding meaning becomes the focus of the creative process and with it, Osorio consciously investigates artifice and its ability to both mask and reveal personal, social, and cultural assumptions.

In a work like The Troublesome Bouquet (2007), Osorio depicts a delicately painted circular swag of flowers and feathers interwoven with skeleton bones and the legs of a woman. Simultaneously beautiful and grotesque, The Troublesome Bouquet demonstrates that the act of revealing absurd and impossible scenarios conceals an imperative impulse to make sense of what unfolds in daily life. In Osorio's own words, "Psychological tensions depicted through the use of positive and negative space betray the need for order and stability in the picture plane. Aesthetic beauty obscures the shadow self. A puzzling image subverts an easy answer to philosophical quandaries. These are the realizations I derive from the process of creating and imagining unusual scenarios."

Arcanum Editions, New York has published a suite of four six-color lithographs hand drawn by Ruby Osorio. Such Wayward Whimsies, Osorio's first suite of prints, were inspired by four specific prints from Goya's Los Caprichos and examine women on the brink of betrothal or seduction. The prints are infused with an unflinching feminine perspective and fashioned with hand stitching, intricate color palates, precise rendering and fantastical imagery. Printed in Los Angeles at El Nopal Press, the suite is an edition of 25 with six artist proofs.

Yuh-Shioh Wong's installation at Cherry and Martin, entitled The Marsupial Project, takes its cues from the marsupial pouch: a space that is both an 'inside' and an 'outside.' Wong's exhibition makes an analogy between pouches and other objects--like books--whose pages and flaps not only open and close, but also serve as places for the individual to inhabit.

Roberta Smith has suggested that Yuh-Shioh Wong's polymorphous installations "revisit Cubism and Surrealism at once." Color, sense and touch is communicated in Wong's work through a range of materials including paper mache and string, concrete, mirrors, seeds and Styrofoam. Formal concerns and a sense of the uncanny play an equal role, directing the viewer towards disassociative narratives.

Yuh-Shioh Wong's exhibition at Cherry and Martin will consist of several floor-based and wall-mounted elements that use improvisation and visual puns as a basis for meditation on life, objecthood and the nature of viewership. The artist reminds us that the installation is a living landscape--one that is animated by the way we look at its geography and its topological form.

Yuh-Shioh Wong's work was the subject of a solo exhibition at Foxy Production in New York in September 2007. Recent exhibitions include Pia Maria Martin, Haeri Yoo, Yuh-Shioh Wong at Thomas Erben Gallery (New York); FAUNA://hybrid at Charim Gallery (Vienna); and Can Buildings Curate at The Storefront for Art and Architecture (New York). She received a BA in Visual and Environmental Studies from Harvard and an MFA in Painting from Hunter College.