Voiceoverhead is a project which is rooted in a record collection of approximately 350 records, including footage documenting political speeches and language orientated radio-programs. I Know the World focuses on the issue of artists in transit and the manner in which the production of artworks is influenced by experiences abroad and encounters with another local context, which are often the result of the artists' participation in international residencies. 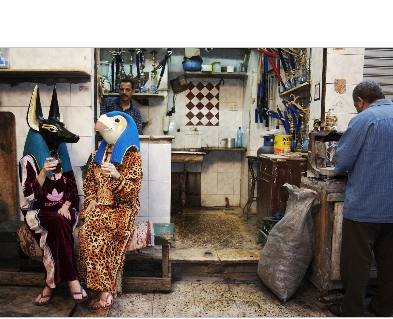 In their collaborative practice Achim Lengerer & Dani Gal deal with audio-acoustics and storage mediums used for acoustic material. Their core interests are audio-recordings, particularly of language, spoken word and speech, original footage taken from radio-broadcastings or other archives. Their work found its multiple form in the project ´voiceoverhead´ which is rooted in a record collection of approximately 350 records, including footage documenting political speeches and language orientated radio-programs. The records aurally cover historical events and were originally designed to function as “documentations of the real”. This notion of the “documentary” has been questioned throughout the history of the medium itself and developed as one of the inherent debates around the emerging modes of reproduction in the late 19th century - the phonograph, film and photography. Starting with the early Lumière-movie ´Workers Leaving the Factory´ the discussion emerges. Among others Harun Farocki has shown, in his 1995 video-essay on the Lumière-sequence, the complexity of a playful representational conspiracy between the audience/viewer, the document/documentarian and the documented beginning at the birth of the genre itself. This act of conspiracy happens per se (it has to re-enact itself as a communicative and rhetorical gesture) when bringing whatever document from the archive back into the sphere of the public.

Lengerer & Gal developed the idea ‘voiceoverhead’ in order to locate the record collection and their artistic practice within a broader context and to include the work of other artists, filmmakers and musicians working with archived language materials in multiple ways and diverging modes. So too do divisions exist in the cultural field: such as electronic music that is entrenched in elements of language and radio-sounds and there is a sub-genre of visual artists, filmmakers and documentarians who also focus their work in this area. Both fields are conceptually and practically applying different approaches to the given speech material: differences in working and presentation methods, as well as differences in distribution and public reception. ´voiceoverhead´ presents, confronts and merges the approaches applied in these diverse cultural productions in the exhibition and in a day of sound performances, taking place on Friday 29 February.

´voiceoverhead´ is a co-production with the Jan van Eyck Academy.

I Know the World

‘I Know the World’ focuses on the issue of artists in transit and the manner in which the production of artworks is influenced by experiences abroad. ´I Know the World´ is an exhibition and a day of talks focusing particularly on works and artistic practices that have been informed by encounters with another local context, which are often the result of the artists’ participation in international residencies. As with the previous edition of ´I Know the World´, which took place at Sparwasser HQ in Berlin in 2007, this exhibition relates to issues of internationalism, mobility and cultural differences, but especially aims to take a closer look at the art works themselves. The works are research based, sensibility and insight gained by the artists on location and some include presumptions and personal artistic strategies which function as useful obstacles when encountering the host country and a foreign context.

Artist duo J&K bring forth ideas of the Orient framed by their own culture and mix them with what they actually observe and discover in their host country. The result is a work that brings to life a futuristic fiction where religions fuse and new world orders unfold before our eyes. Søren Lose's work comments on the heritage of Danish culture by juxtaposing the classical icons of so called Danish national romanticism with his own photographs and found tourist snap-shots. The work also reflects on how a country succeeds in bringing home an international artist when he gains foreign recognition and questions how his work is inscribed into national art history. Tamar Guimaraes’ work ‘Jan Leton and the Archive’ uses footage of outdoor theatre play, re-enacting a historical situation around a former slave, Jan Leton. Today, please stay home! Please stay home today stay home stay home home home home is a quote from a digital running text display that is part of Tanja Nellemann Poulsen & Grete Aagaard´s installation ‘Set Up Tours …’. With this work the artists express a critical voice towards these clichés of the travel and 'life style industry' images. Daniëlle van Zuijlen’s is currently finishing a five-year residency in the town of Hoorn. In this sort of inverted residency, she stays in her ‘own’ country and hosts visitors from abroad. She presents a pamphlet that can be taken home by visitors. 'Hosting' in a slightly different sense is also introduced by the artist duo Nienke Terpsma & Rob Hamelijnck. Through their participation in residencies the artists produced and published issues of the magazine ´Fucking Good Art´ collaborating with artists in the host cities. These issues will be presented in the exhibition.

The artist talks will take place on Sunday 3 February 2008, in collaboration with Trans Artists (the independent foundation that informs artists of any discipline about stays abroad).

The exhibition and talks are supported by the Danish Art Agency.