Tuesday to Saturday, from noon to 5 pm 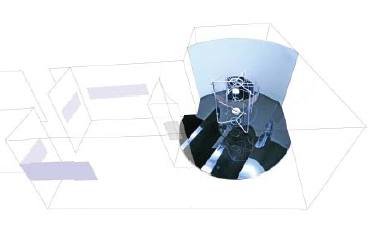 It begins with a repeated observation. At night I walk along a canal. On the other side are lights. I see their reflections stretching out across the surface of the black water. As I walk I notice that, no matter where I am on the bank of the canal, the rays of light on the water follow me. This makes me realise that a radiance unites my gaze with the visual effect of the reflections and the surrounding reality. The image I see is a moment of this radiance. There are as many radiating realities as there are points of view and images. This radiating projects images along a vector of depth that runs from there to here.

I then had the idea that the two poles of my representation of the world are located at the two ends of this line, running from infinity to immediacy: the image of a landscape and the image of a face. A panoramic image of a landscape is therefore the kinetic moment which takes place when I turn around with my gaze pointed towards the periphery, while the panoptic portrait is the other kinetic moment when I turn around my subject, with my gaze pointed towards its centre. Whether centripetal or centrifugal, it seems to me that all images are beams of light sweeping across space, with the intimacy of the gaze at their source. [P.D.]

Capturing the 360° radiation of the visual substance of the human body. Twelve images chosen from the catalogue of panoptic portraits of 88 people created for Atlas, an audio and video project carried out in collaboration with the composer Christian Calon. After studying stage design and visual arts at Concordia University, Pascal Dufaux worked on a number of set designs, including L’Espace Shruthi, L’Orchestre-vélo and L’Ensemble Karel. Since 2001, he has created an installation that is a 2D and 3D hybrid, the Projet Pléthore at the Centre d’exposition du Vieux-Palais. He has created Des mesures dévastées at the Maison de la culture Plateau-Mont-Royal; phénomènes / formes intermédiaires at Espacios de arte and Substance verte > ce qui se tient sous le vert at Action Art Actuel. He created the video Substance verte at OBORO’s New Media Lab in 2005. Among his designs are the set for the opera Alternate Visions, produced by Chants Libres in 2007. In 2007-08 Autour de vous and Alzheimer are exhibited at VU in Quebec City and the Joyce Yahouda gallery in Montreal.