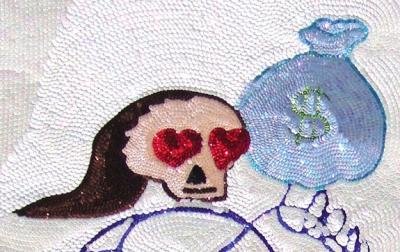 Two artists with equally unique sensibilities, whose singular practices brashly celebrate individual freedom and ‘rebellion through beauty’, Galtarossa and González got together in 2007 to launch their Chili Moon Town Tour upon the world.

An astonishing floating city and fantasy real estate project, Chili Moon Town debuted at Chapultepec Lake, Mexico City, as part of the MACO art fair in April last year, and will travel on to New York in 2008. Chili Moon Town re-imagines the immigrant experience as a process of aesthetic self-creation, inviting viewers to sail toward the ‘big city’ in rowboats and deposit their wishes in thousands of floating bottles inside the glittering banner and neon-bedecked interior of the city.

Acknowledging the uniquely metropolitan synthesis of desire and hard cash that makes up any big city experience, Chili Moon Town funds itself through selling off advertising space and ‘apartments’ in the city at the gallery’s art fair booths and through the artists’ web site.

Spreading its creative transgression to the gallery space, the work on show at Spencer Brownstone Gallery has developed from the thousands of square-feet of designs and decorations that adorn Chili Moon Town. Simultaneously futuristic and handmade, the banners are made up of a multitude of freely sewn elements in luridly plush colors and fabrics, displaying the artists’ obsessive urban iconography, pimped-out with borders and tails of a riotously eclectic cultural provenance.

Anna Galtarossa had her first solo exhibition at Spencer Brownstone Gallery in 2004. She has participated in the Prague Biennale and had solo shows at Viafarini and Padiglione Arte Contemporanea, Milan. After spells as a chemistry student and professional tennis player, Daniel González launched his first clothing collection at the age of nineteen. His current ‘Clothes Project’ continues to manifest itself at events including the Prague Bienniale, Viafarini, Milan, and Play Gallery, Berlin.

Chili Moon Town Tour Productions recently completed their ‘Homeless Rocket with Chandeliers’, the decoration of a 500ft crane that could be seen in the skyline over Milan during December. A full- color book on Chili Moon Town Tour will be published in 2008.