Portriaits & landscapes. An exhibition of over 200 unique 10''x 8' black and white photographs, almost all of which have not been seen before. Shot during the last ten years of his life, between 1976 and 1987, they give a remarkable insight into Warhol's photographic practice and his preoccupation with documenting everyday life. Curated by Steven Bluttal. 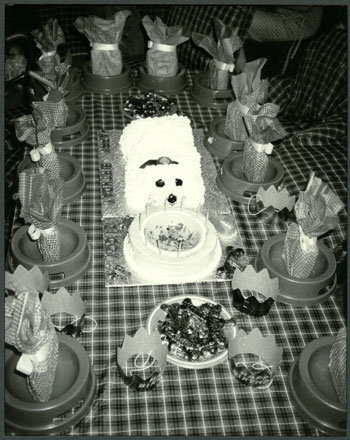 curated by Steven Bluttal Timothy Taylor Gallery is delighted to present Andy Warhol: Portraits and Landscapes, an exhibition selected and installed by independent curator, Steven Bluttal, of over 200 unique 10” x 8” black and white photographs, almost all of which have not been seen before. Shot during the last ten years of his life, between 1976 and 1987, they give a remarkable insight into Warholʼs photographic practice and his preoccupation with documenting everyday life. Taken as he moved around Manhattan, and other cities including London, literally snapping everything that came his way, they portray a collection of commonplace objects including dog-food, toilets, chairs, sidewalks, garbage, storefronts, shirts, teacups, mannequins, drunks, pigeons, sausages, toys, place settings and aeroplanes. The exhibition coincides with the 21st anniversary of his death, in what would have been his 80th year.

The exhibition reveals Warhol as the lover of boring things, who used the camera and the tape recorder to collect traces of what surrounded him in his final decade. It also reminds us of the importance of photography in Warholʼs practice and how he should be viewed first and foremost as a photographer rather than a painter. Photographs were used as the source material for almost all his paintings and prints. Having used publicity photographs and magazine images as the basis of his compositions throughout the 1950s and 1960s, during the 1970s, Warhol picked up his own camera and kept snapping until he died.

Evident in works including Untitled (Apples), Untitled, (Cups and Saucers), and Untitled (Dog Food Cans), is Warholʼs delight in the aesthetic of repetition. Echoing the silk-screen paintings of Campbellʼs soup cans and dollar bills, these photographs are a celebration of the ordinary, aiming to “democratize all experiences by translating them into images” (Susan Sontag, On Photography, 1977). In examining Warholʼs exploration of the banal, Bluttal reveals the artistʼs talent for formal composition. Works such as Untitled (Flea Market, Stuffed Animals), Untitled (Street), and Untitled (Litter), all evoke the inherent melancholy of objects. As Warhol casts his eye over hotel mini bars, liquor bottles, empty chairs and emergency exits, he creates nonfigurative portraits and urban landscapes.

[The] very celebrity of Warhol, his sheer, inescapable fame, has often disguised the fact that he was one of the most serious, and one of the most important, artists of the twentieth century. He quite simply changed how we see all the world around us. He had an uncanny ability to select precise images that still have great resonance today.

- Kynaston McShine, Chief Curator, MoMA, New York Steven Bluttal is an independent curator, archivist and photography editor, and is based in New York. He is a former curator of the Estate of Andy Warhol, and of the Mies van der Rohe Archive, Department of Architecture & Design, Museum of Modern Art in New York. Bluttal was the Editor of Halston and Photographs of Ron Gaella, published by Phaidon Press and Greybull Press respectively, and the Photo Editor of Andy Warhol “GIANT” Size, also published by Phaidon. In 2007, Bluttal curated the exhibition of early works on paper entitled Andy Warhol 1948-1960 at Timothy Taylor Gallery.