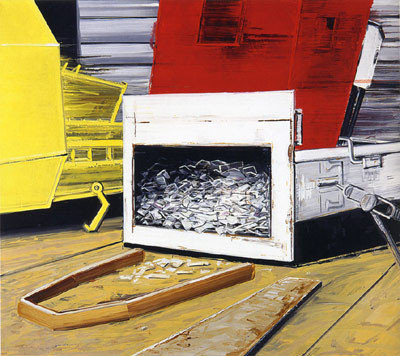 Adam Adach’s paintings seem eerily timeless. We gaze at moments of condensed stillness that are overlaid with a silvery veneer of melancholy. Inevitably, we are reminded of old photographs or movie sequences, in which the passage of time is revealed through scratches and marks, although it is difficult to determine when exactly they were produced. No matter how hard we try to decipher the signs, they frequently remain hidden, refusing to yield their secrets. Similarly unapproachable, aloof and estranged, Adach’s figures gaze past the viewer into a profoundly empty distance.

In a portrait series from 2007, each picture depicts a single sitting or standing individual, whose name provides the title of the work. The life-size portraits show people in seemingly private, unobserved moments of self-absorption. They appear isolated, though they are united as a group by the “and” in the paintings’ titles. “And Eva, “And Julia,” “And Agnies,” “And Bob,” we read. However, what actually unites them much more is their pose. They appear insecure, unstable, full of doubt. What is going on in their minds? Ewa, wearing a suit jacket, arms crossed in front of her chest and eyes closed, seems lost in a private reverie; looking sad and wistful, Agnies gazes to the side, a half-empty bottle at her feet; Julia, her pigeon-toed pose betraying indecision, clutches a cell phone in her right hand as she stares into the distance; Bob is perched on a radiator, his back to the window, taking a drag from a cigarette, tense and pensive. Adach uses rapid, dynamic brushstrokes to render these figures. While their contours are clearly delineated, their surroundings seem to dissolve into agitated lines. The world around them is in motion, yet they appear frozen in static poses. Who are these people? Their names suggest they might be Polish, like the man who painted them.

The artist’s native Poland has been undergoing rapid societal and political transformation since the breakdown of the Communist system. This state of flux is clearly reflected in Adach’s most recent works; the poses depicted in these portraits, in particular, reveal uncertainty and doubt in the face of the new and unfamiliar. Works such as the diptych All the small towns: Leszno, Suwalki (Year??) subtly refer to Poland’s difficult relationship to its past and the reawakening of nationalism. Adach cleverly draws on the leaden past and the ever-changing present to piece together a hybrid post-modern reality. The artist sees Poland with both the intimately familiar eye of a native son and the detached gaze of an outsider, as he moved to France directly after the fall of the Iron Curtain to study art, and has only recently begun commuting between Paris and Warsaw.

Adach draws on both old photographs or newspaper clippings he finds at flea markets and his own contemporary photographs as source material for his paintings. Thus all his images have been filtered through the lens of a camera. Though his compositions are based on photographs, their rendering is decidedly painterly. Much like the early Gerhard Richter, he makes conscious use of distancing elements in his painting and thus accords a dimension of permanence to these fleeting moments in time. In Cheap History (Year??), for example, Adach selects – with the practiced eye of a professional flâneur – a random detail view of a flea market stand. The array of wares is a motley assortment, with rubber boots, books and irons side by side. But right in front, almost inconspicuously, there is a black emblem with the imperial eagle and a swastika, and among the books in the background we can, upon closer inspection, make out a history book and a publication on Pope John Paul II. This apparently random arrangement is not simply a reference to the mindless selling off of history; Adach is telling us here about the dangerously heterogeneous interest groups in contemporary Polish society, in which ultranationalists and religious conservatives are increasingly gaining a foothold and holding back the country’s integration into a multicultural Europe.
Adach is no political activist, however. He is rather a quiet, sensitive observer, a traveler in time who manages to distill collective tendencies, dreams and moods into brief moments and give them a frame that transcends time.

Arndt & Partner Berlin is pleased to announce a joint exhibition by Karsten Konrad and Tim Trantenroth in the Gallery 2nd Floor. The two Berlin artists collaborated for the first time for this show. The point of departure for this cooperation was the fact that both in Karsten Konrad’s sculptural works and Tim Trantenroth’s paintings, we can observe an intense engagement with the urban architectural structures of the city where they live and work.

Thus, Karsten Konrad started in the 1990s to create installations and objects out of materials found in the trash and subsequently modified into modules. With these, he took up thematically outstanding urban structures in Berlin, transforming them into idiosyncratic architectural models. In recent years, however, these model-like works have made way for increasingly abstract sculptures and relief works. Since the original point of departure for Konrad’s work as an artist was the autonomous abstract sculpture, this may seem like a return to his beginnings. However, it should rather be understood as the consistent continuation and expansion of his sculptural transformations of architecture, which in terms of form he liberated from their strict character as models, calling them “explosions of architecture.”

In contrast to Karsten Konrad, Tim Trantenroth uses paintings to develop his themes. In his works, we find an emphatic engagement with the construction principles of modern functional buildings. Thus in his paintings we often encounter adaptations of typified but versatile facade designs, as well as the side effects of this architecture like, for example, surveillance cameras or uncounted variations of concrete barriers. His paintings are very reduced and simplified both in their formal language and their colours, corresponding to the dull grey of contemporary architecture. Individual features of the painted buildings become only visible on close examination; sometimes Trantenroth makes reference to a certain building in his titles: Chancellery, Finance Ministry, or Danish Embassy in Berlin. But the titles do not just refer to the respective sites, but also to the specific meaning of architecture in its symbolic dimension.

Tim Trantenroth, born 1969 in the Fichtelgebirge, Germany, studied at the Academy of Fine Arts Münster and the Art Academy Düsseldorf. He lives and works in Berlin. He presented solo exhibitions at the Kunstruimte Villa de Bank, Enschede (2005), and Förderverein Aktuelle Kunst, Münster (2002), among others. Group exhibitions he participated in include Cada uno para sí y Dios contra todos, OMR Gallery, Mexico City (2007), Classified, The Cartin Collection, Hartford, Connecticut (2006), Uwaga Berlin, Baltic Gallery of Contemporary Art, Slupsk, Poland (2005) and open minded, dollhouse Orchard Street, New York (2004), which he co-curated. This is his first exhibition at Arndt & Partner Berlin, after we had introduced him to the Swiss public with his solo show in Zurich in 2006.