Two exhibitions proposes considering feminism as a source of knowledge that is vital for understanding the world we live in, and as an essential framework for going investigating visual works that deal with situations of inequality experienced by women, and women artists in particular, at the beginning of this 21st century. Works by more than 20 international artists, the shows are accompanied by a congress. 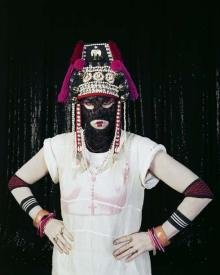 In January 2008, the Montehermoso Kulturunea Cultural Centre is initiating a new project directed at the production, exhibition and dissemination of art and contemporary thought, coming within the key strategy of working on the triad formed by “art, culture, society”. This innovative project is a pioneer in Spain in applying the policies of gender equality to the field of culture and contemporary art, in addition to the production of projects and specific research to be integrated into the Centre’s annual programmes.

This new scheme is to be launched this coming 25th January with the inauguration of “La Mirada Iracunda / The Furious Gaze”, a group exhibition commissioned by Maura Reilly and Xabier Arakistain.

In order to disseminate and promote an understanding of feminist art and thought, the exhibition will be accompanied by a congress / course in which a number of theorists, artists and cultural and political actors will analyse the issues outlined above.

Curated by Xabier Arakistain (Director of the Montehermoso Kulturunea Cultural Center) and Maura Reilly (Curator of the Elizabeth A. Sackler Center for Feminist Art, Brooklyn Museum)

The exhibition The Furious Gaze proposes considering feminism as a source of knowledge that is vital for understanding the world we live in, and as an essential framework for going investigating visual works that deal with situations of inequality experienced by women, and women artists in particular, at the beginning of this 21st century.

This international group exhibition presents a collection of works by 20 artists, from different cultural backgrounds, who express their views on the fallacy of sexual equality and on a fury that has no possibility of being displayed. This exhibition connects with the different artistic events which were held in 2007 on both sides of the Atlantic and which explored the relationships between art and feminism, all directed at incorporating feminist avant-garde works into the history of art and at furthering those objectives that are still pending in the feminist political agenda. On this matter, although it is something that is difficult to believe at the beginning of this 21st century, these objectives still include achieving true equality between men and women.

The exhibition title refers to a question raised in 1996 by the woman philosopher Amelia Valcárcel in La Política de las mujeres – The Politics of Women. For her, the irate expression was the reaction shown by those women who, having reached the age of thirty and having interiorised “the mirage of equality”, then undergo the disagreeable experience of discovering that the equality they thought they enjoyed is actually being shattered into smithereens as it impacts against an unexpected “glass ceiling”, preventing them from climbing higher up the professional ladder; a “glass ceiling” that also covers the field of art, a barrier which women artists come up against throughout their professional careers.

In the past, sexual and gender-based social inequality was interpreted by resorting to a hypothetical “natural inferiority” of women, an interpretation which successive waves of the feminist movement, and in particular the one in the late sixties and seventies in the last century, demonstrated to be politically and theoretically invalid. From that time onwards, and in line with the large-scale incorporation of more women into fields of activity, such as art, which women had hitherto been materially and symbolically prohibited from entering, the notion of the “mirage of equality” was coined. A mirage which consists in assuming that inequality between men and women is a “thing” of the past. However, this assumption is in stark contrast to all the information available and which clearly demonstrates that this inequality still persists even today in each and every field of activity. For example, in the field of art, the persistence of this “mirage of equality” is threatening the feminist agenda still pending and which specifically concerns it. An agenda which is often labelled as being out of fashion, putting human rights on the same level as mere questions of “fashion”.
Xabier Arakistain & Maura Reilly.

Although the first demands in favour of gender equality date from the 17th century and despite fights for women’s political and civil rights have been constant since then in western history, three centuries later, gender equality still is a matter pending.

This course focuses on discrimination against women in all fields in order to get deeper into the concrete field of Art. Thus, from Art, philosophy, and culture, the aim of this course is to get nearer the concepts tackled by female artists and curators taking part in the collective exhibition “La mirada iracunda” (the Furious Gaze). Concepts like “the illusion of equality” or “the glass ceiling” will be dealt with in the lectures, while covering different contemporary feminine art strategies.

The selection of the proposed video works has been carried out with the aim of provoking and strange feeling around a biological or essential concept of the term ‘woman’ and of the woman/femininity pairing.

The Feminist Art Movement was born in the United States during the decade of the sixties and, since then, the body becomes an experimental and knowledge field that is the starting point for many female artists’ work. Within this process, a new concept of it would make easier other identifications contributing to the creation of imageries empowering these female artists.

One of the aims of a feminist art practice has been the setting of a vanishing line around essentialist approaches to sex and gender. Thus, the creation of new representation codes denaturing femininity and masculinity will provide us with identification spaces for a wider range of body possibilities.