An exhibition of true topophilia; to use the term by the French philosopher Gaston Bachelard. It examines the "love for places and interiors" through the eyes of various international photographers like Lucinda Devlin, Andreas Gursky, Candida Hofer, Abelardo Morell, Matthew Pillsbury, Kate Schermerhorn, Hiroshi Sugimoto. 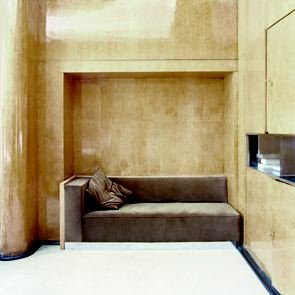 "Not only our memories, but the things we have forgotten are housed". Our soul is an abode. And by remembering interiors and rooms, we learn to abide within ourselves. (...) The house images move in both directions: they are in us as much as we are in them. (...) The unconscious is housed. (From: The Poetics of Space, Gaston Bachelard)

ŒInteriors¹ is an exhibition of true topophilia; to use the term by the French philosopher Gaston Bachelard. It examines the Œlove for places and interiors¹ through the eyes of various international photographers. Some of these artists try to evoke a sense of emotional place rather than the physicality of interior¹s forms. They are merely interested in the memories and feelings evoked by the interior settings, as can be determined in the work by James Casebere, Candida Höfer and Hiroshi Sugimoto. Others, like Kate Schermerhorn, Andreas Gursky, Lucinda Devlin and Matthew Pillsbury, examine rather how interior spaces express the values of the culture that creates and uses them. At yet another level, we can distinguish the search by Friederike von Rauch and Karl Hugo Schmölz for capturing the pure architectural beauty of spaces and the way how changing light and shadow define surface, volume and depth. Abelardo Morell even has transformed many rooms into cameras; his interiors are reduced to black boxes or camera obscuras. The images of these photographers offer us diverse and personal levels of research on the vast theme of Œinteriors¹. However, they all seek to challenge our perception of the reality of spaces; of how we see and experience them.

James Casebere (b. 1953) makes models of institutions such as prisons, schools and hospitals. Although impermanent and fragile, these copies faithfully imitate the often imposing architecture and masterful construction of the originals. Casebere then photographs them, creating images of strangely unfamiliar, yet recognisable, locations. Over the past twenty years or so, the artist has made a significant contribution to photography, his projects having been both of, and for the times: dealing with the distribution and operation of authority, and the development of a critical method of representation by way of fabrication.

Between 1991 and 1998 Lucinda Devlin (b. 1947) photographed in penitentiaries in twenty states, with the permission and cooperation of the local authorities. She called the resulting series The Omega Suites, alluding to the final letter of the Greek alphabet as a metaphor for the finality of execution. The series includes thirty chilling colour photographs of execution chambers and associated spaces, such as holding cells and viewing rooms. Viewers are often drawn by the beauty of the images and then repelled by the reality of the subject. Devlin expresses an interest in Œletting the environments themselves communicate directly with viewers¹.

Andreas Gursky (b. 1955) is famous for his large-scale, colour photographs distinctive for their incisive and critical look at the effect of capitalism and globalisation on contemporary life. Since the 1990s, Gursky has concentrated on sites of commerce and tourism with images ranging from the vast, anonymous architecture of modern day hotel lobbies, apartment buildings and warehouses to stock exchanges and parliaments. Gursky¹s world of the 1990s is big, high-tech, fast-paced, expensive and global. Within it, the anonymous individual is but one among many.

Candida Höfer (b. 1944) photographs rooms in public places that are centers of cultural life, such as libraries, museums, theatres, cafés, universities, as well as historic houses and palaces. Each meticulously composed space is marked with the richness of human activity, yet largely devoid of human presence. Not purely architectural photographs, her rhythmically patterned images present a universe of interiors constructed by human intention, unearthing patterns of order, logic, and disruption imposed on these spaces by absent creators and inhabitants.

Abelardo Morell¹s (b. 1948) photographs remind us that photography is more about how we see than the tools we use to create it. As we become ensconced with computer technology, more and more artists are returning to the past, working with processes and instruments more than one hundred years old. Morell is one of those artists who burst onto the scene with a series of images made with a camera obscura; a lensless camera most often associated with Renaissance artists. He takes an ordinary room and transforms it into a camera by placing black plastic over all of the windows, leaving a 3/8¹¹ hole through which the light passes. He then sets up his view camera in the room, points it at the opposite wall, opens the lens and lets the image appear on the film over the next eight hours.

Matthew Pillsbury (b. 1973) makes provocative and contemplative night time interior photographs in black and white. With clear reverence to the work of Hiroshi Sugimoto, Pillsbury¹s photographs manage to capture the spirit of connection and isolation with our 21st century TV and late night computer culture. He has created projects which have included the launch of XBOX, LA friends on cell phones and our emerging laptop society. The artist has been awarded the prestigious 2007 HSBC Foundation for Photography Prize. Kate Schermerhorn¹s (b. 1966) images deal with the reality/fantasy theme of Los Angeles. She examines throughout her photographs the aspects of LA that relate to the real and the unreal; a plastic cactus on the sandy ground of a real desert; a medical practice that turns out to be a porn set;Š She continually asks herself: ŒWhat is Los Angeles: La La Land? City of Angels? Entertainment Capital of the World? City where Dreams are Made?¹.

The photographs of Karl Hugo Schmölz (b. 1917, d. 1986) belong to the best source material of Cologne¹s architectural growing, planning, destruction and rebuilding; they illustrate the city¹s history in a detailed way. In cooperation with his father and because of an enormous productivity he left a vast work, which documents Cologne since the Twenties. Karl Hugo Schmölz and his father worked for nearly every architect of high standing, the planning department, building contractors and their clients and they documented not only the building but also the sketches and models.

Hiroshi Sugimoto (b. 1948) has probed the aesthetic and conceptual boundaries of photography for over thirty years. Using a large-format camera and, for the most part, black-and-white film, he has created series that include, among other things, architectural scenes. The physical outlines of some of the world¹s most celebrated buildings dissolve in Sugimoto¹s Architecture series, begun in 1997. These blurred, almost dream-like images conjure the moment when an architect¹s inspiration begins to coalesce into a vision for building as well as the impression of a renowned site that remains after seeing it.

Friederike von Rauch (b. 1967) seeks out special places and buildings, which in her photographs seem at once strange and familiar. These spaces have to be empty, because that is when, to her, their beauty is best appreciated. The lack of a human presence deprives the buildings of their functionality. The buildings in her photographs are no longer buildings, but monumental sculptures. Her photographs are meticulously stylized. The framing and the angle are chosen with great care. There is also a play of lines and sometimes a striking contrast between the concrete-grey planes and vibrant colour.