The exhibition "... 5 minutes later" takes up a debate that under the rubric of disegno versus pittura has preoccupied art historians since the thirteenth century; works by Robert Barry, Martin Boyce, Thomas Demand, Hans-Peter Feldmann, Ceal Floyer, Douglas Gordon and many more. Lutz Mommartz makes films that address specific questions rather than presenting concepts. As part of the attractive KW complex, Hotel Marienbad offers accommodation with all modern conveniences in a listed building in the heart of the German capital. 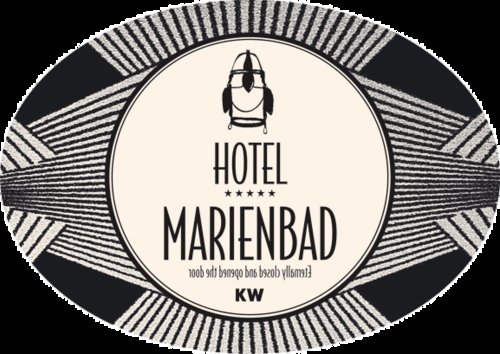 An old legend about the Japanese artist Hokusai tells how over many years he failed to fulfill a commission for a picture of a cockerel. After several years and sundry reminders the incensed client decided to seek out the artist in his workshop where, under his impatient eye, Hokusai drew the long-awaited picture within a matter of seconds. Yet when the client protested against this casual treatment of his commission, Hokusai led him into the next room. It was filled with books, models, notes, drawings, and sketches. The work he had apparently created within only a few seconds was actually the result of long and laborious effort.

The exhibition ... 5 minutes later takes up a debate that under the rubric of disegno versus pittura has preoccupied art historians since the thirteenth century. What is more significant: the authentic sketch or the elaborately executed masterpiece? All works on display were created especially for the exhibition and within only five minutes. Inspiration, spontaneity, and immediacy define the essence and explosive potential of this group exhibition.

Thanks to NOMOS GLASHÜTTE

At 17, civil servant in the municipal administration
Between 14 and 23, competitive sports
Between 6 and 25, drawing and painting
Between 25 and 30, traveling and lounging about
Between 30 and 33, playing with consciousness on 8 mm
Since then production of 16 mm movies

In 1967 Lutz Mommartz (*1934) submitted his first four 16 mm movies at the legendary festival of experimental film in Knokke-le-Zoute, where his works attracted a great deal of attention. All four were accepted, three were screened in the competition, and his film Self Shots (1967) was awarded the internationally recognized festival prize. Interestingly, his radically experimental approach has resulted neither in abstraction nor in severe conceptualism: Mommartz’s point of departure has always been the interaction with camera, medium, and people.

Lutz Mommartz makes films that above all draw on the experimental initial situation. Since he always enters into a certain constellation, sets himself a task, or concentrates on an individual idea, his movies address specific questions rather than presenting concepts.

As part of the attractive KW complex, in an atmosphere of historical splendor and present-day vitality, Hotel Marienbad offers accommodation with all modern conveniences in a listed building in the heart of the German capital. Generosity and attention to details are the hallmarks of our suite. Exquisite designs, materials, and colors imbue the suite with its unique and personal charm. Distinguished interiors that strike a perfect balance between ambiance and service leave nothing to be desired.

The name of the hotel and the neon sign were created by Scottish artist Douglas Gordon. The rooms are the work of the hotel’s first guests, the artists’ collective Marienbad (Claudia Heidorn, Anna Jandt, Anneli Käsmayr, Jenny Kropp, Alberta Niemann).