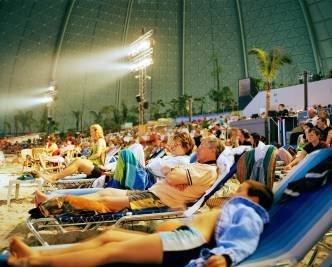 Tourism has long since become a crucial phenomenon of today’s mobile world society. The traces left by travelers all over the Earth give evidence of a continually growing tourist industry and mark the beginning of a global movement that drastically transforms presentday man and the spaces he passes through. The exhibition “All-Inclusive. A Tourist World,” on show at the Schirn from 30 January to 4 May 2008, presents numerous works depicting and critically questioning various tourist phenomena. Documentations, parodies and defamiliarizations of traditional tourist motifs, and dream images interlink with subjects like migration, tourist industry, and global communication. The project curated by Matthias Ulrich assembles works by about 30 internationally renowned artists such as Michael Elmgreen and Ingar Dragset, Ayşe Erkmen, Peter Fischli and David Weiss, Tracey Moffatt, Jonathan Monk, Santiago Sierra, and Thomas Struth.

The exhibition “All-Inclusive. A Tourist World” is sponsored by Messe Frankfurt GmbH, Verein der Freunde der Schirn Kunsthalle e. V., and Smiths Heimann GmbH. Tourism is a desideratum full of steadily recurring images of beauty, longing, recreation, and adventure. The tourist is on his way to these images to confirm, to duplicate, and to archive them as the résumé of his vacation. The British artist Martin Parr’s photographs, for example, depict tourist patterns of behavior frozen to clichés, as it were, and unfold a picture of the vacation activities of an underprivileged class primarily centered on his native Britain. The artificial tourist landscapes of the Austrian artist Reiner Riedler’s photo series “Fake Holidays” are based on similar stereotypes.

They too confirm Peter D. Osborne’s theory that tourist photography mainly serves the purpose of confirmation and not of discovery. Yet, the pictures’ appeal also changes their subjects. In accordance with the prevailing images, trite places turn into interesting destinations, and famous sights are used for whatever objective: there are world parks like the Shenzhen Window of the World with sights from all over the Earth or projects like in Las Vegas and Dubai with cliché elements from famous cities and cultures. Perfectly orchestrated places where you can ski in summer and get some Caribbean sun in winter are no less artificial and, at the same time, serve as bearers of desires.

Tourism is of global importance, mobilizing by calling for mobility and making it possible – from the individual setting out into the unknown and making new experiences to entire regions transformed into sights such as the Basque city of Bilbao under its Guggenheim Museum’s influence. The comical, sometimes absurd mise-en-scène of a Nepalese landscape untouched by tourism in the American artist Stuart Hawkins’s film “Souvenir” or one of the provocative works by the Spanish artist Santiago Sierra realized on the vacation island of Mallorca in 2001 are set against this background.

Present-day tourism constitutes itself through networks exceeding the borders between different cultures and nations – a fact that necessarily calls into question certain binary notions like host and guest, native and foreigner, rooted and nomadic. Travelers find themselves confronted with other people living in the global city rather than with the specific circumstances of a place. Traveling has also become an everyday routine for many contemporary artists. Much of it finds immediate expression in their works, like in the baggage conveyor belt turning around its own axis by the Scandinavian artist duo Michael Elmgreen and Ingar Dragset or the huge archive of vacation photos by the Swiss artists Peter Fischli and David Weiss.

The experience of certain places and spheres such as airports and hotels is anything but limited to tourists today. The individual’s mobility informs the character of working life in the capitalist economic system, which brings about an organization and design of large parts of the word tailored to mobility. Because of this wave of mobilization, escape as the tourist’s motive to get rid of everyday dictates and devote himself to a paradisiacal life has to be dealt with in a new context. For a different movement often occurs on the paths of tourism – a movement grounded in political and economic circumstances: migration as the stagnating traffic counter to tourism. The Moroccan artist Yto Barrada, who was born in France, has impressively captured this dualism in her photographs about Tangier and the Straits of Gibraltar, for example. The London-based Bulgarian artist Ergin Çavuşoğlu aims at something similar in his film “Point of Departure,” in which the transit zones and travel spaces of Stansted and Trabzon, a Western and an Eastern European airport, cross each other.

CATALOG: “All-Inclusive. Die Welt des Tourismus.” Edited by Max Hollein and Matthias Ulrich. With a preface by Max Hollein and ten texts that have emerged from a public literary contest on the subject of tourism. In addition, all works in the exhibition are described in short essays by April Elizabeth Lamm, Jessica Morgan, and Matthias Ulrich. 236 pages with ca. 150 illustrations, German. SNOECK Verlag, Cologne. ISBN 978-3-936859-81-2, 26 euro.