If Everybody had an Ocean 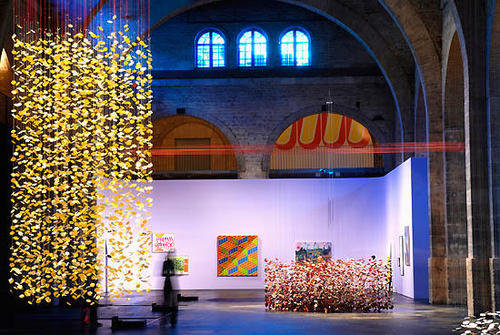 In this exhibition, Brian Wilson’s life and music becomes a lens through which to reconsider various developments in art since the 60s, particularly as they relate to their social, urban and popular cultural contexts, especially as manifested in southern California. At the same time, art becomes a means of considering the contradictions between the popular image of the Beach Boys and Wilson’s complex musical aspirations and legacy. By focusing on works in which Pop Art, abstract painting, Minimalism and Conceptual art variously converge - a recurring phenomenon in art from the West Coast - the exhibition implicitly questions the mutual exclusivity of these art historical categories. These convergences find a parallel in Brian Wilson’s suturing of rock n roll, jazz, classical music, folk and the avant-garde (e.g. musique concrete) in his pioneering production work of the mid 60s. They also complicate, rather than altogether refute, the binary, antagonistic ways wit h which many Modernist thinkers have framed the relationship between the avant-garde and popular culture (e.g. Theodor Adorno, Guy Debord and Clement Greenberg). Brian Wilson, himself, was something of a victim of this antagonism, paying a high psychological price for his dual identity as both pop star and
avant-garde artist.

The focus of the exhibition is that brief and prolific period from 1962 to 1967 when Wilson was the principal creative force behind the Beach Boys. The works are arranged somewhat episodically to suggest a loose biographical and historical arc. 'Loose' because few of the art works were made with Brian Wilson or the Beach Boys in mind. Generally, they were chosen to evoke the feel and form of the music, or something of the social, cultural and psychological circumstances from which it arose. The exhibition plays off the conventions of thematic exhibitions - biography being a particularly circumscribed thematic genre - by behaving in untypically ambiguous, multivalent ways; the emphasis is on free association rather than representation. Nevertheless, the project arose from the conviction that Brian Wilson offers an unexpectedly coherent organising principal for a disparate collection of post-1960s art.