Tourism and the American Landscape

Frederic Church, Winslow Homer, and Thomas Moran. The exhibition explores the work of 3 influential artists in the context of the new and growing tourist industry in the United States during the second half of the 19th century. It includes nearly 130 objects, studio paintings, and drawings, as well as books, stereographs, railroad brochures, and decorative objects. 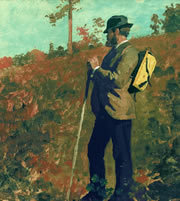 From January 30 to May 4, 2008, the Cantor Arts Center at Stanford University presents “Frederic Church, Winslow Homer and Thomas Moran: Tourism and the American Landscape.” The exhibition explores the work of three influential artists in the context of the new and growing tourist industry in the United States during the second half of the 19th century.

As railroad and steamship companies opened the nation’s previously inaccessible regions to visitors, landscape artists created images that inspired tourists to travel to distant locales like the White Mountains, the Adirondacks, Yosemite, and Yellowstone. Church, Homer, and Moran traveled extensively in the United States in search of picturesque and sublime landscapes to paint. Their works, along with guidebooks and travel-related photographs and novels, helped to familiarize American audiences with the nation’s scenic wonders.

The exhibition, which is organized by Cooper-Hewitt, National Design Museum, Smithsonian Institution in New York, includes nearly 130 objects, made up of more than 70 painted oil sketches, studio paintings, and drawings, as well as books, stereographs, railroad brochures, and decorative objects. The exhibition is accompanied by a 200-page illustrated book with essays by the curators of the exhibition and two outside scholars.

At Cooper-Hewitt, National Design Museum, the exhibition was made possible in part by the generosity of Enid and Lester Morse. Support was provided by public funds from the New York State Council on the Arts, a State agency, Stephen McKay, Inc., Furthermore: a program of the J.M. Kaplan Fund, and Movado. Additional support was provided by W. Leslie Duffy, Margery and Edgar Masinter, Susan and Jon Rotenstreich, Mr. and Mrs. Frederic A. Sharf, Mr. and Mrs. Richard J. Schwartz, and Larry and Janet Larose.

At Stanford, the exhibition is made possible by the Clumeck Fund, Bernard and Barbro Osher, Drs. A. Jess and Ben Shenson Trusts, Jefferies and Company, Inc., and Cantor Arts Center members.