The artist presents a series of new paintings, sculptures and works on paper. The exhibition is a continued exploration of provisional or transient structures, examined through an idiosyncratic language informed through the surreal decay of Soviet communism. 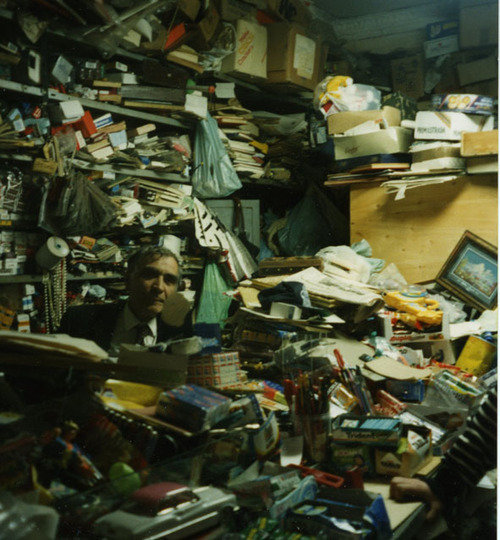 For his first exhibition in the UK, Russian artist Andrei Roiter presents a series of new paintings, sculptures and works on paper. Entitled Dom (the Russian word for house or dwelling), the exhibition is a continued exploration of provisional or transient structures, examined through an idiosyncratic language and distinct aesthetic informed through the surreal decay of Soviet communism.

Roiters recent sculptural works— small shacks atop music stands— seem to recollect dilapidated, impermanent structures. Somehow antithetical to the sheer size and posturing of traditional Soviet architecture, Roiter’s ‘Waiting Rooms’, rendered coarsely from modest materials, hold an appeal that has an insouciant, human aesthetic. On the walls are hung monochrome drawings, which resemble, somewhat ambiguously, hovering boulders or piles of packing-crates — images that recall the interstice period of construction, images that remember the movement of equipment carried by cranes and that resonate with the very spaces between buildings themselves.

In the main gallery is a sculpture that is both suitcase and projector. Constructed haphazardly from discarded wood, it appears as a machine with no distinct purpose — both an artefact and temporary solution. To the rear of the space hangs a painting of a man sitting on top of a floating ball, and the pieces converse, waveringly, in their relationship as apparent-image and apparent projector.

“Roiter creates a post-utopian, fearful art — a crazy art characterized by nostalgia for a society that no longer exists, and that he didn’t much like when it did. The isolation of Roiter’s objects, adrift in space, reflects that Soviet era when choice was as foreign as plenitude. Roiter has referred to it as “a kind of minimalism”: not the pure, clean minimalism of Malevich, which reflects the ideological certainty of the communist revolution in then-radical abstraction, but the minimalism of paucity that followed on its heels. For Roiter, who grew up in the shadow of Malevich’s idealizing abstractions, making figurative art was the more radical gesture, a break with the oppressive yoke of sham perfection. Roiter likes old things; in the words of the American transcendentalist Henry David Thoreau, he mistrusts any enterprise that requires new clothes. “Important things live long,” Roiter has said, “and get shabby.” Thus, importance becomes associated with endurance, and anything that has survived to be a link to the past accrues value. He dignifies the mundane by showing how routine, battered objects have souls of their own.”— Andrew Solomon

Andrei Roiter was born in Moscow in 1960 and since 1988 has lived and worked in both New York and Amsterdam. A graduate of the Institute of Architecture in Moscow his work has been widely exhibited around the world, including recent solo exhibitions at Kunsthalle Recklinghausen, Germany; Galerie Anhava, Helsinki; Galerie Akinci, Amsterdam and Galerie Tanya Rumpff, Haarlem, The Netherlands. Recent group exhibitions include, 2nd Moscow Biennial, Moscow, Russia and ‘A Sense of Place’, Limerick City Gallery, Ireland. This is Roiter's first exhibition in the UK.

A catalogue has been published to coincide with the exhibition, with an accompanying essay by Andrew Solomon.