"Thaddeus Strode: Absolutes and Nothings" presents a selection of large-scale paintings by this LA-based artist. Wild mash-ups of California surf and skateboard culture, Zen philosophy, rock music, literature, film, and comic books. War and disaster have shaped the first years of the XXI century. "On the Margins" brings together a culturally diverse group of international artists whose work addresses contemporary social and political conditions through a wide spectrum of styles and media. 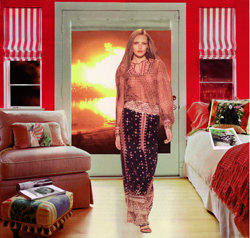 Strode's work represents a provocative strain within contemporary painting, one that expresses, among other things, a strong penchant for dark humor and the absurd. Much of the strength and visual pleasure of Strode's aesthetic comes from his self-reflexive combination of painterly styles and preposterous elements, allowing enigmatic texts, phantoms, monsters and castaways to play off one another to produce cryptic — and captivating — fantasy worlds. For example, Under the Killing Moon (…Spilling and Spilling…There Was a Point Where No One Resisted) (2004) depicts a large pale toad perched amidst a dark skyscape of floating orbs, keyboard letters and truncated phrases. The title, meanwhile, alludes to the classic 1984 post-punk anthem by Echo and the Bunnymen, adding yet another layer of meaning to this potent scene.

Strode's compositions seldom convey specific themes or fixed ideas, but are filled with contradictions and incoherencies that play with viewers' expectations while merging modes and styles historically viewed as oppositional — abstraction versus figuration, the expressive versus the rational. Unlike Pop or various instances of appropriation art, which directly incorporate recognizable imagery from mass media and everyday life, Strode's canvases contain fragments that appear familiar yet somehow thwart the viewer's ability to pinpoint definitive sources. One striking example is Come out Screaming (American Dreams) (2006), in which a hillbilly-like cartoon figure marches through geometric abstractions as well as loose, painterly drips and splashes.

Another key aspect of Strode's work is the diverse and constantly evolving cast of characters — gorillas and castaways, ghosts and monsters — that demonstrate his interest both in the grotesque and in transitional states of being. For example, the castaway in Strode's Absolutes and Nothings (2001), from which the exhibition's title is derived, is an instantly recognizable metaphor for alienation and detachment from mainstream society. Here depicted in a state of limbo, the figure exists somewhere between civilization and island primitivism, thus revealing the artist's heightened sense of the incongruous, the sinister and the bizarre.

Thaddeus Strode: Absolutes and Nothings will be accompanied by a full-color illustrated catalog. The book will contain essays by Eckmann and Malone as well as a provocative piece of short fiction by the author and visual artist Benjamin Weissman. Support for the exhibition was provided by James M. Kemper, Jr.; the David Woods Kemper Memorial Foundation; the Hortense Lewin Art Fund; and museum members.

Born in 1964 in Santa Monica, Calif., Strode studied at the Otis/Parsons Art Institute and the California Institute of the Arts, earning a BFA degree from the latter in 1986. His work has been exhibited across the United States and internationally, including more than 20 solo gallery shows at the Kunstverein in Heilbronn, Germany; neugerriemschneider in Berlin; Galerie Michael Janssen in Cologne; Galleria Gio Marconi in Milan; the Cirrus Gallery and the Happy Lion, both in Los Angeles; among others. Recent group exhibitions include Sympathy for the Devil: Art and Rock and Roll Since 1967 at the Museum of Contemporary Art, Chicago; Imagination becomes Reality at the ZKM in Karlsruhe, Germany; KLF: Strictly Painting at the KLF Project Space in New York; and Funny Cuts: Cartoons and Comics in Contemporary Art at the Staatsgalerie in Stuttgart. His work is in public and private collections worldwide. He lives and works in Los Angeles.

War and disaster have profoundly shaped the opening years of the 21st century. In the United States and abroad, acts of violence and terrorism as well as natural catastrophes have resulted in large-scale destruction and displacement affecting the lives of millions.

In February, the Mildred Lane Kemper Art Museum at Washington University in St. Louis will present On the Margins, an exhibition exploring the impact of war and disaster through the work of a diverse range of contemporary artists. Curated by Carmon Colangelo — a nationally known printmaker as well as dean of the university's Sam Fox School of Design & Visual Arts — the exhibition will showcase more than a dozen works, ranging from prints and photographs to video and large-scale installations, by ten artists from around the world.

Several installations play against traditional approaches to war memorial. For example, Fallen (2004-ongoing), by the American artist Jane Hammond, comprises a large field of brightly colored leaves, each bearing the name of a soldier killed in Iraq. Similarly elegiac is Metal Jacket (1992/2001), by South Korea's Do-Ho Suh, which consists of 3000 dog tags stitched to the liner of a U.S. military jacket. Abidin Travels: Welcome to Baghdad (2006), an interactive video installation by the Iraqi expatriate Adel Abidin, allows viewers to become virtual tourists amidst the wreckage of his native Baghdad.

Ghost Story (2007), by Ireland's Willie Doherty, and Bouncing Skull (2007), by Italy's Paolo Canevari, are both haunting videos that capture the subtle, quiet horrors of life in a war zone. The Ghost of Liberty (2004), by Mexican artist Enrique Chagoya, uses the format of a traditional Mayan codex to investigate the wake of 9-11 through a mix of political, religious and popular imagery drawn from diverse cultures. Strategic Museum Plan for Baghdad (2006) by the Cuban artist Luis Cruz Azaceta, who now lives in New Orleans, ponders the fraught connections between the arts and war.

The Difference between Black and White (2005-06), by the African-American artist Willie Cole, is a strikingly formal piece, constructed from hundreds of old shoes, that subtly alludes to the meditative mandalas of Tibetan Buddhism. Laylah Ali, a Washington University alumnus, explores the tension between violence and social revolution in a series of simple yet meticulously crafted gouache drawings. Finally, Martha Rosler's Bringing the War Home: House Beautiful, New Series (2004) is a suite of satiric photomontages that embed militaristic imagery within the trappings of upper middle class luxury.

Support for On the Margins was provided by the Charles and Bunny Burson Art Fund and by individual contributors to the Kemper Art Museum and Sam Fox School of Design & Visual Arts. An illustrated, full-color catalogue will accompany the exhibition. The volume, distributed by the University of Chicago Press, will include a foreward by Colangelo as well as critical essays by Eleanor Heartney and Paul Krainak.