The artist visited numerous places in the Kolyma mountains of eastern Siberia in 2006. The medium and large formats photographs, that Schonfeld took during her journey, bear witness to a barely intangible history. 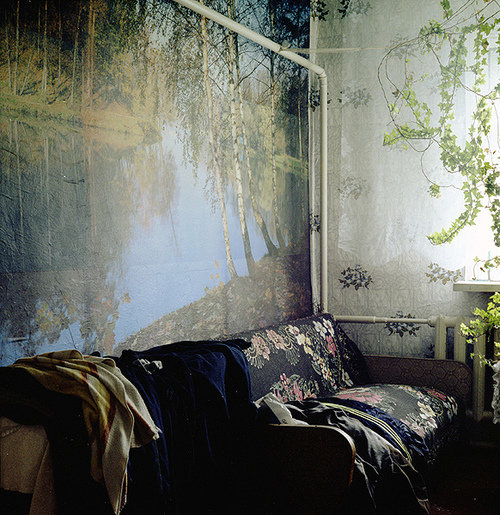 Funded by a DAAD travel grant, the Berlin based artist Sarah Schönfeld visited numerous places in the Kolyma mountains of eastern Siberia in 2006. It was only during the dictatorship of Stalin, that this inhospitable region was inhabited, and from then until the 1960's hundred thousands of laborers were forced to extract gold und uranium under extreme climatic conditions in penal camps ("GULag"). Until this day, the descendants of these laborers, as well as workers who posteriorly have been attracted by promises of financially lucrative state bonuses, live here. Kolyma is the region, upon which the nobel prize laureate for literature, Alexander Solschenizyn, bestowed worldwide fame with his book "Archipel GULag". Today, the term "Archipel GULag" has become synonymous with all the islands of repression and dehumanisation, that were spread over the entire Sowjet Union.

The medium and large formats photographs, that Schönfeld took during her journey, bear witness to a barely intangible history. They induce a timelessness and striking beauty into these places, which stands in an ambivalent relation to the history of the camps; it seems impossible to bring this beauty into accordance with the painful reality of the places. In order to refill this vacancy and give invisibility a face, Schönfeld has used old cinematic footage disposed of in a landfill by the local cinema of Ust-Omtschug at the end of the Sowjet era, and now rediscovered by the artist only by chance.

For about 15 to 20 years the film rolls were thus exposed to exactly that territory, which Schönfeld now attempts to re-narrate. Over all those years, the passage of time, the heat in the summer and the cold of the winter left traces on the chemical emulsion. Schönfeld analysed the footage, picked out single film stills, scanned these, and finally enlarged them.

Schönfeld went on to discover correspondances in form and content between the prints from the filmmaterial and her own colour photogaphs, made during her journey. By combining certain images and isolating others, she managed to expose these relations. Images of inactive uranium mines thus correspond with the colours and abstract figures produced by time and weather on the filmstrips. Interior spaces are wowen together with the landscape images; public spaces with hatchings and crystalline structures. With the series "Ghosts", Schönfeld creates a visual space for the unspoken, the uncertain and forgotten. The portrait of Mischa, a young Siberian, is emblematic of Schönfeld's gaze at the past and thereby becomes a key to understanding the entire body of work.

The real events that have taken place at these sites - we only know fragments of them. These fragments are made up of historical notes, documents, novels, testimonials, photograhps, and commonly known images from the communist past. The series "Kolyma" is based on different sources. The artist talked to numerous people in the region. She photographed members of the younger generation in their favourite places. Over a longer period of time she accompanied the research of the "Memorial" project, an institution commited to documenting the Russian past. In one way or other, all these different approaches influenced the series and now express themselves in the conscious framing, the clear alignments and diagonals, the immediacy and in the transparency of these images.