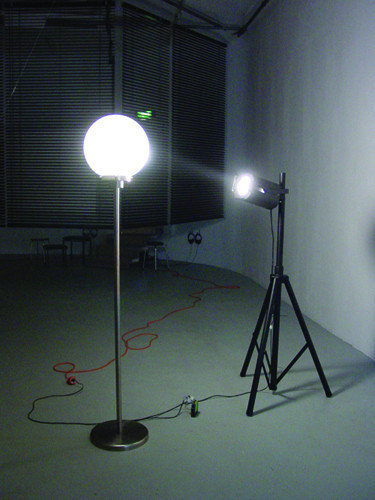 ∙interfacing (ĭn’tər-fā’sĭng) 1. A surface regarded as the common boundary of two bodies, spaces or phrases 2. The facts, problems, considerations, theories shared by two or more disciplines, procedures, or fields of study 3. A common boundary or interconnection between systems, equipment, concepts or human beings 4. communication or interaction 5. A thing or circumstance that enables separate and sometimes incompatible elements to coordinate effectively 6. A woven or nonwoven material used between the facing and outer fabric of a garment, as in the collar and lapels of a jacket, to add body and give support and shape to the garment.

∙practices (prak-tis es ) 1. An habitual or customary performance 2. A habit or custom 3. A repeated performance or systematic exercise for the purpose of acquiring skill or proficiency 4. The condition arrived at by experience or exercise 5. Archaic plotting, intrigue or trickery.

The production of an artwork is an assemblage of decisions made consciously or unconsciously at the time of the production of the work itself or during downtime away from it sipping coffee at a café, drinking a beer in a park or sometims, in the throws of a drunken stupor when a Eureka moment cascades down the torrent of streaming ideas that in the end finds itself located on the canvas, installation or film. When that series of decisions becomes organized into a set of rules and when those rules become formalized into a set of conditions that produce the work itself and these rules are then repeated sometimes looping back into the artists own archive or that of the general archive of the history of art then the artwork becomes a practice.

This exhibition asks the following questions; What then of six practices organized together in one space? What diagonal readings become apparent in the viewers mind as they traverse the space? What magic is conjured when the materialization of the artwork is subservient to the nature of the procedure that produced it? A procedure that is tethered to the work and makes its appearance as a woven support system, that gives the work excess body but which does not in anyway fetishize practice itself. Rather than inquiring into the meaning of painting through painting itself they use painting, this could be said of other media as well, to understand something other then itself like social networks, anthropology, archeology and politics. The exhibition also asks; Is the fore-grounding of apparatus and process rather then form, color, shape, a more flexible, engaging and nimble means to research this “outside”?
Interfacing Practices features six women artists from different cultural contexts.

Elena Bajo, 6 Degrees of Separation, 2007. Found paintings discovered in thrift stores and flea markets are assembled together on a single plane, in this case a larger canvas, and over-painted and tethered together with silver reflective tape, mirrors and photographic images of site specific found sculptures she has made in alley ways during walks through Berlin. As such the painting or maybe it should be called a non-painting is more like a record of a series of performative gestures collaged together.

Helen Cho, United by Chance. 2007 Different colored Karate belts, which signify the stages of expertise in the Martial Arts, are arranged as colored strips of color vertically in the corner where two walls meet. Their Minimalist excess, the optical patterns and color affects the belts express by touching each other in their downward swoop become entangled in each other as they touch the floor and form a matrix of interwoven textures in which any of their formal meaning is released becoming instead a plicated multiplicity.

Tamar Guimarães, A Man Called Love, 2006, Lying somewhere between a documentary film, a slide lecture and an installation this work is an investigative research project into the psychic, political, social, and psychological forces that define history and the nature of the conflict that results in Brazil at a specific time. It makes use of still images of Francisco Candido Xavier, a Brazilian medium and psychogeographer, images of spirit materializations produced in the 30 s and 40s as well as images from the late 60s of protests against the Military dictatorship. Tying all this together is a voice over narration by the artist Charlotte McGowan-Griffin.

Mathilde ter Heijne, Experimental Archeology; Goddess Worship, 2006, Moon Rituals, 2007 The production of contemporary ceramic objects were made using the archaic wood firing methods during several full-moon sanctification rituals. These reenacted rituals acted to embed each of the objects with an aura of the goddess cultures they ostensibly refer back to. As such they are the materializations of the practices through which they themselves were constituted and act as indexes of cultural memory.

Maryam Jafri, Costume Party: Colony and Native, 2006 This historical theatrical pastiche is presented as a three screen video projection in which off stage and on stage is tethered to the more contemporary cinematic apparatus of off-screen and on-screen, As such the apparatus itself becomes a form of diapositif, to use Foucault’s term in which these two modes of filmic attention become instrumentalized as methods of information sequestration and information incarceration. When applied to our knowledge of history they each together form a machinic assemblage in which the subjects mind and his or her memories are the focus of that instrumentalization becoming a biopolitical moment. Real Fear and Imaginary Fear are the stand-ins for off-screen and on-screen, stage left and stage right, backstage and on-stage.

Haegue Yang, Relational Irrelevance-Version Domestic Berlin, 2007 The arrangement of
domestic spaces “sits in” for the conditions of the interpersonal relations it holds. In the case of a chair or a table they become more then simply a place for a tired bum or place to write a poem. They embody the memory of the conditions of the sensibility that constituted a connectivity between people which at times can be elusive. So much so for two lights bathed in each others light energy. As such over time they become a kind of ergonomic reconstitution for the “building of contemplation” shared as mindedness, the condition found in humans in which each of us is aware that the other is a thinking sentient being.