A historical survey of installation drawings, created during a 40-year period beginning in 1968. The subjects of these works include corridors, room installations, diagrams for the positioning of blocks, underground tunnels and shafts, and plans for multi-channel video projections. 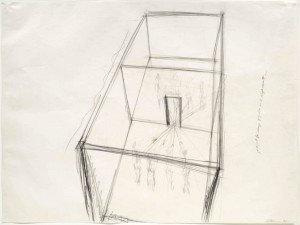 Sperone Westwater is pleased to present a historical survey of installation drawings by Bruce Nauman, who has just been selected to represent the United States in the American Pavilion at the 53rd Venice Biennale. This is Nauman’s ninth solo exhibition with the gallery.

Over 35 drawings are on view, and were created during a 40-year period beginning in 1968. These works relate specifically to installations that were conceptualized, and sometimes realized in the early part of the artist’s career – a time when Nauman’s ideas were spreading into multiple mediums including sculpture, performance, video, photography, film, and sound. The subjects of these drawings include corridors, room installations, diagrams for the positioning of blocks, underground tunnels and shafts, and plans for multi-channel video projections.

In his essay, “Projection and Displacement”, published in the exhibition’s catalogue, Michael Auping, Chief Curator at the Modern Art Museum of Fort Worth, writes:

Of all the types of drawings Nauman has done for different mediums, his drawings for installations are particularly interesting […because] they reveal, perhaps more than any other type, how Nauman thinks his way not simply into sculpture but into the peculiar kind of space his installations present.

Each of the drawings on view retains a matter-of-fact formal quality. The simple, straightforward character of these works underscores Nauman’s tendency to present an idea in its essential form. Upon close examination, it is evident that these drawings possess a conceptual quality that is as equally powerful as the physically realized installations themselves. These works give the viewer a glimpse into Nauman’s mind at work – how the artist aims to measure, explore, and manipulate space, and how this space interacts with the viewer’s psychological and physical being.

Also on view is "Cones Cojones" (1973–1975), Nauman’s seminal installation combining drawing and poem/text. This work consists of masking tape on the floor and two framed collages on the wall. According to Nauman, the concentric circles of tape affixed to the floor represent a cut that bisects a cone the apex of which begins at the center of the earth and ultimately projects out to the universe. The two typewritten texts provide insight into Nauman’s emotional, philosophical, and formal intentions. In describing this important work, Nauman has stated that “the tape on the floor becomes almost… a visual aid to the text. The text is asking you to imagine a physical description, and the tape is an illustration of where you’re supposed to be imagining it [the cone] passes through the gallery.”

Bruce Nauman is widely regarded as among the most important living American artists, and has influenced a generation of artists from around the world. Over the past four decades, his work has employed forms that range from Post-Minimalism and Conceptual art in mixed media including film, video and sound. Nauman’s work has been exhibited in a number of important gallery and museum exhibitions worldwide.