Two seminal collections of Russian art. "Moscow - New York = Parallel Play" and "Thaw: Russian Art From Glasnost to the Present". The works reflect the major current of Russian alternative culture and describe the history of independent, or "non-conformist" art processes and movements from the 1960s to the present. 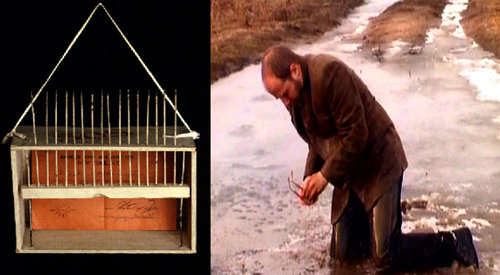 The Chelsea Art Museum – Home of the Miotte Foundation - is proud to bring together two seminal collections of Russian art.

The Kolodzei Collection, founded by Tatiana Kolodzei in Moscow during the height of the Cold War and continued today with her daughter, Natalia, is one of world’s largest private collections of Russian and Eastern European Art, with over 7,000 pieces by more than 300 artists from Russia and the former Soviet Union, chronicling four decades of nonconformist art from the post-Stalinist era to the present. The Kolodzei Collection is a living, open entity, which continues to grow, and reflect changes in culture, while reacting to the variable nature of contemporary art.

The exhibition Moscow-New York=Parallel Play: Selections from the Kolodzei Art Foundation Collection of Russian and Eastern European Art was first shown at the National Centre for Contemporary Arts (NCCA) in Moscow in 2007. The exhibition highlights the artistic axis of the two cities, representing Russian artists living or working in these two art capitals and creating with their art an international context and distinctive intellectual plastic Russian "rhyme" in the international art community.

The works reflect the major current of Russian alternative culture and describe the history of independent, or “non-conformist,” art processes and movements from the 1960s to the present.

Undoubtedly, politics have influenced the arts in Russia, and Marat Guelman, founder of the M+J Guelman Gallery in Moscow, has become something of a legend in his lifetime for both his support of the arts and his often provocative political stance.

The title THAW is based on a real experienced situation by the people and the art world in Russia from the 1960s onwards, a period of slow, gradual but real thaw, a defrost of three quarters of a century’s cultural freeze that happened not in a single decade, but over several decades, culminating in the period of the 1990s known as Glasnost.

The Marat Guelman Gallery is one of the first and most famous galleries to appear in the Post-Soviet Russia. It was founded in 1990, a year before the Soviet Union collapsed. Just as a few other forward-thinking institutions that emerged in the 90s, the Gallery not only provided exhibition space, but also presented itself as an intellectual workshop, developing ideas and concepts for the art of today's Russia. For further information visit http://www.guelman.ru/eng/gallery/