Jacob Robichaux works with materials, processes, and ideas related to our earliest forms of knowledge and experience. He is interested in engaging formal and conceptual strategies to represent the self through the world. David Brooks' project dramatically re-figures the sobering white space into minimal and organic chaos. Dozens of sheetrock pillars virally sprout from the floor like forest sprawl inching up the mountainside. 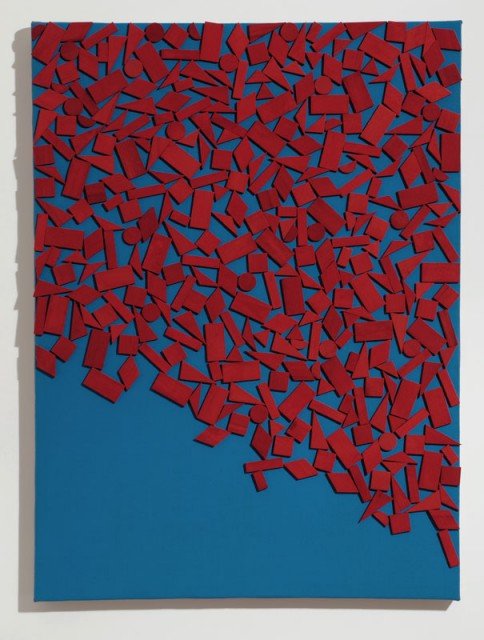 Museum 52 is delighted to announce the first solo show for New York based artist Jacob Robichaux. Robichaux works with materials, processes, and ideas related to our earliest forms of knowledge and experience. He is interested in the implications of engaging abstract formal and conceptual strategies to represent and experience the self through the world.

Robichaux is influenced by the writings of the 19th Century philosopher and inventor of Kindergarten Frederich Froebel. Froebel recognized the latent potential for each child to discover him/herself through play. Rather than assign a series of rote pedagogical exercises to teach cultural values, the child is encouraged to create the self through tactile sensory experiences with simple forms and materials.

Robichaux takes Froebel's teachings as the basis for his practice. He adopts heuristic processes of transformation and discovery that offer a reflexive experience of the potential for generating meaning through play. By adopting the freedom these activities and thought processes encourage, while not regressing into a naive or childish aesthetic, Robichaux creates works that have expressive freedom and formal self-awareness.

The exhibition features works on canvas, assemblage, collage, floor-based sculptures, and performance. The works are made from items selected from his plethora of collected, quotidian materials including dyed wool, straws, string, and wooden parquetry tablets. To generate the works he approaches his materials as a problem-set that can be resolved through a process of formal solutions. Simple strategies are used to this end including folding, burning, cutting, and tying. The works are never finite; each work is one possible solution to a not yet fully defined problem. The relationship between the collages, paintings, and assemblages is non-hierarchical, with discarded fragments of each being interchangeable and treated as potential new elements in another artwork.

The collages are presented unframed on individual shelves, giving the viewer a direct experience of the materials, method of facture, and tactile qualities. Color plays a more prominent role in the works on canvas, where the painted grounds create optical tension between sculptural elements and the two-dimensional picture surface.

The floor-based sculptures are carefully composed vignettes of found objects, collected and grouped for their abstract visual, aural, and tactile qualities. The vignettes are ambiguous; their meaning determined though a series of performances throughout the duration of the exhibition. Robichaux, whose interest in performance is shaped by his childhood experiences as an amateur magician, has invited friends and artists to arrive at the gallery unannounced to perform. With no prior knowledge of which objects they will perform, they are instructed by a text drawing listing objects in a specific vignette. The objects will be removed from the exhibition and performed downstairs in the front window of the gallery, engaging the relationship between the gallery context and the outside world. After each performance, the objects will be returned to their original position in the exhibition space. Thus, Robichaux invites others to explore his materials and objects with the same compulsive drive to continually generate meaning through activity and play.

Quick Millions is David Brooks' first exhibition at Museum 52. The project is the first of a series of major installations in the lower ground space at Museum 52, New York.

Brooks' project dramatically re-figures the sobering white space into minimal and organic chaos. Dozens of sheetrock pillars virally sprout from the floor like forest sprawl or favela houses inching up the mountainside. For Brooks, quick millions, are found in abrupt ecological change and land development, in population growth, in the bar-chart ascent of office towers and in the arterial thrusts of roads through the Amazon. From global markets to microbes, Brooks draws from a nebulous tangle where mergers and acquisitions analogously shape the natural world.

The composition of Quick Millions emulates the undulations of weather patterns and financial flow. Hastily constructed columns at varying degrees of completion are partially demolished, torn open with floodlights ablaze in the rubble. The bulbs simultaneously destroy, adorn and illuminate, leaving the rubble saturated with light, imprinting traces of the work on the retinal memory. The columns portrays a distraught system integrating incompletion, irruption and decay.

Quick Millions employs the dynamic of entropy, as explored by artist Robert Smithson, from whose 1965 sculpture Brooks takes his title. But whereas Smithson conceived of entropic form on a geological time-scale, Brooks accelerates the notion and treats entropy on a viscerally human time-scale, of years, months, days and minutes. Within the columns of Quick Millions remain the ghosts of evolutionary millennia razed in our clear-cut forests, the ruins of buildings built on speculation, of monuments to accumulating capital and memorials to the losers of this nexus of sprawling growth and exchange.