A group exhibition where light is the common focus: electric light, black light, reflecting light, the sound of light, light sources. Drawing together a disparate group of artists, the show holds a range of conceptual experimentations, ideas and practices under the spotlight. Curated by BillL Cournoyer. 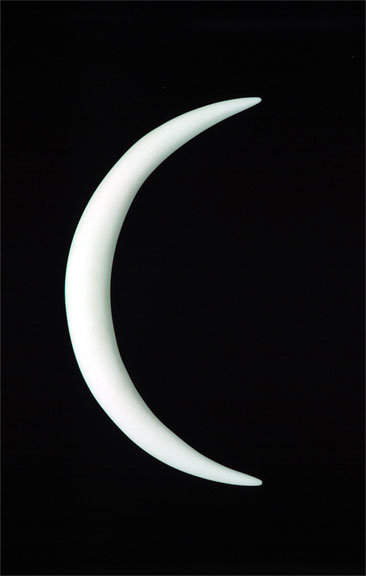 Foxy Production presents Power, a group exhibition where light is the common focus: electric light, black light, reflecting light, the sound of light, light sources. Drawing together a disparate group of artists, the exhibition holds a range of conceptual experimentations, ideas and practices under the spotlight.

Fiona Banner’s illuminated drawing, Nude Standing, exemplifies her explorations of the possibilities of language in art. The work engages with the history of painting, offering a wry critique of the male gaze and the female object. Her use of neon announces a bold statement on a conventional subject.

Falke Pisano’s photographic triptych, Rhythm in Space with Diamonds, brings to mind the words of Marcel Broodthaers: “Words in statues shine like diamonds.” On a table lies a book with photographs of modern sculptures: As one gazes through a prismatic diamond down onto the sculpture Rhythme dans l‘espace by Max Bill, one finds a chaotic interior.

Gerard Byrnes’ photograph, A country road. A tree. Evening., portrays a landscape of unnatural circumstance. Springing from an interpretation of Beckett’s stage directions for Waiting for Godot, this uncanny work shines multiple stage lights of deep color onto a lonely countryside at night.

Jacqueline Humphries’ black light paintings realize the idea of painting as a source of light: they literally radiate U.V. light. Her ingenious choice of medium transforms the gallery space, covering the viewer in a luminescent glow. The works, by displaying their inner workings and creating an immersive effect, both deconstruct and re-energize the viewer’s experience of painting.

Amy Granat’s film, Chemical Scratch, was created by her literal assault on film material. The resulting abstract images produce a galactic-like experience of light and space, while the audio of her “damage” captures the “sound of light.” Her physical interventions demonstrate the centrality of material transformation in her work, and its oscillation between construction and destruction.

Mitzi Pederson’s sculptures are made of commercially produced and easily accessible materials that are transformed into new and unfamiliar shapes. They act as agents of light, absorbing their environment while simultaneously grabbing the viewer’s attention. In Hello Again, the metamorphic interactions of light with the work produce surprising inflections and perspectives.

Gyan Panchal, like Pederson, uses industrial everyday materials, but his choices take on very different meanings. His works are inspired by an archaeology of abstract objects: the exploration of the origin of objects and of the relevance of abstraction today. In Gaern, the surface reflects light with a shiny vibrancy, while its frayed edges suggest decay. In Splei, Panchal uses primitive materials and markings that bring the work to the border of representation and abstraction.

Guillaume Leblon’s gouaches, “Les Succulentes”, present plant varieties that can survive extreme temperatures and harsh light. Ironically, these images are designed to fade in the light: they are made with un-fast ink. Leblon’s complex and nuanced work formulates striking visual binaries as if it is in dialog with itself.

James Lee Byars’ Slit Moon is a crescent shaped sculpture that resembles what astronomers call earthshine: “The reflection of light from the sunlit side of the earth unto the otherwise dark side of the moon.” Made of Greek marble, it underscores his abiding concerns with contrast, with life and death, with the ephemeral and the enduring.