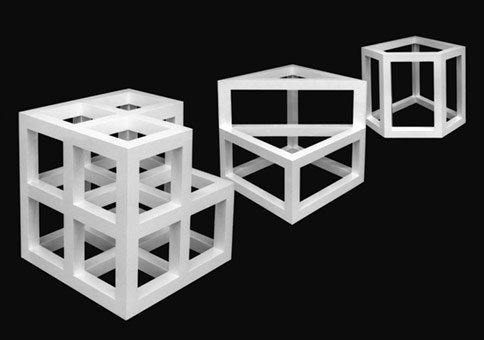 Mathematics is everywhere: The exhibition Exact and Different considers the connections between the ways art and mathematics conceive reality. 120 positions demonstrate how questions of mathematics have influenced art in the 20th century. Magic squares – such as the one found in Dürer’s Melencolia I (1514) – along with the bold perspective constructions in the Renaissance have continued to fascinate artists. Beginning in the 20th century, it is in turning away from central perspective that the artists such as Juan Gris, Henri Laurens or Giacomo Balla looked for inspiration in mathematics; where for the Cubists the simultaneous representation of many different viewpoints, the segmentation of reality into geometrical building blocks, would be the central theme, the Futurists would concentrate on the acceleration of the world through the dynamicism of forms.

The corresponding abstraction and detachment from phenomenal reality would then culminate in concrete art, where Theo van Doesburg, Georges Vantongerloo and Max Bill would champion the use of pure forms of art based on geometrical forms – here again, mathematics provides the basis for these ideals and claims. Beginning with Kasimir Malevitch, the square itself would again and again return as the object of painting. Countless artists, from Paul Klee to Bruce Nauman, from Josef Albers to Peter Weibel have created their own interpretations based on this simple form.

Marcel Duchamp, Man Ray and Surrealists such as Max Ernst were interested in natural sciences and mathematics, especially Henri Poincaré’s work. Constructivists such as Naum Gabo and Antoine Pevsner were likewise inspired by geometrical and mathematical models.

The convergence of art and mathematics is again important in the 1960s where Carl Andre, Donald Judd and Sol LeWitt often produced formally reduced, systematic and serial works with simple geometric primary forms. At the same time, the first computer art works based on algorithms began to appear.