For this exhibition, the artist has created a new series of large format water pictures. Over the last 20 years, the photographer has produced an important body of inquisitive images, using the direct printing method of the photogram, the pinhole camera and the daguerreotype. 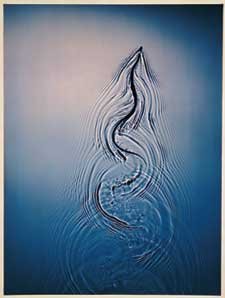 Over the last twenty years, the English photographer Adam Fuss (° London, 1961), has produced an important body of visually exquisite and theoretically inquisitive images, using the direct printing method of the photogram, the pinhole camera and the daguerreotype. In the ’20s, Man Ray and Laszlo Moholy-Nagy viewed the photogram as a means of subverting the mechanicity of photography because it provided a means of creating a photograph without the technological eye of the camera; Fuss exploits it more for its capacity to estheticize, to transform objects and substances into ghostly and ephemeral silhouettes of the ‘real’. His photograms aim neither at imitation nor illusion, they are an attempt to ‘create’ again, something which has been lost. ‘I have always needed to make images that have a sense of revelation to the viewer, …’, he says, ‘It is like the sensation of looking into the face of someone very beautiful. Or perhaps, when … you are faced with the unknown’.

For his fourth exhibition at the gallery, Adam Fuss has created a new series of large format water pictures. As a child, Adam Fuss spent a lot of his time out of doors, in the hilly woods and fields of West-Sussex. He loved nature in all its diversity. A lot of the motives he later uses in his photographic work: the sunflowers, rabbit entrails, mushroom spores, smoke columns, butterflies, birds and water drops are all based on natural phenomena he observed in his childhood.

In the tranquile water pictures, Adam Fuss puts the focus on drops falling into a still surface, producing concentric ripples. Fuss renders the moment the drops touch the surface with great precision but succeeds, at the same time, to transform the photographic literalism of its subject into a broader, metaphysical dimension.

Following the success his work has enjoyed since 1990, Fuss has been concerned at times that his water pictures might only be read as water and his spirals only as symbols. By perfecting his vocabulary and the technical processes he uses, Fuss is thus seeking to heighten yet further the subtle ambiguities of his work. The water pictures have hence developed more glowing, with more intense depths, more mystery, turning our thoughts from water ‘to seas of stars, to planetary constellations in movement, to what he calls ‘paintings of nature’. As Adam Fuss has said about his work as a whole: ‘it is about vital energy’.Solo exhibitions by Adam Fuss have been held in England, France, Belgium, Germany, Australia, Sweden, Italy, Japan and the United States. His work can be found in important museums and private collections worldwide.