Counter Images. The exhibition presents the crude encounter of Feldmann's austere painting and Steinbrecher's sculptures cast in aluminium. Their practices reflect on their claim to universal validity and detach and separate the image from the image object or the form from the object in a seemingly playful yet precise manner. 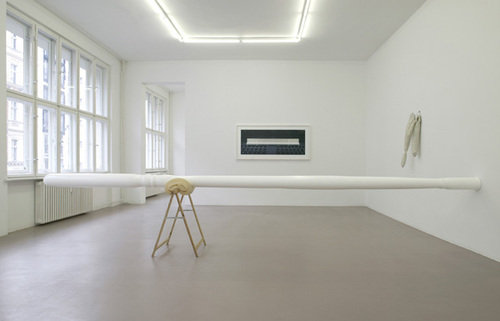 /Counter Images/ would be a hypothetical title for the exhibition of Friederike Feldmann and Erik Steinbrecher. The show has no title, however, since the crude encounter of Feldmann's austere painting and Steinbrecher's sculptures cast in aluminium do not require any addition. /Yet image, reproduction, cast, imitation, copy, doublet, mimicry, replica, side piece, double/, synonyms of the term counter images, outline the content-related aspects and describe the technical approach of the two artists. Friederike Feldmann and Erik Steinbrecher take up existing, everyday objects (Steinbrecher) and images (Feldmann), reflect on their claim to universal validity and detach and separate the image from the image object or the form from the object in a seemingly playful yet precise manner.

These thought and action processes of reversal, detachment and turning inside out resemble technical reproduction procedures. They additionally evoke a new visual image ground or a layer of perception lying between colour and picture medium, between cast and source material. The rolls and sausages covered with aluminium, additionally alienated from their original materiality by a shining powder coating, and the floral and chain-like applications of Erik Steinbrecher's sculptures, at times woven to a lamp and a sculpture, point to the conceptual void of grasping and defining everyday or useless objects and forms. What remains in the end are curious objects, citations of everyday life that refer to the ways in which mass products are used.

Friederike Feldmann divides black into cyan, magenta and yellow according to the subtractive colour mixture, creating disturbing fuzziness by means of meticulously painted overlappings and layers that remind one of misprints, and adding her reflection on gestural painting, which she calls "how to paint action painting", on the canvas, which is at once picture medium and colour element. Both artists place their works in one room, thus marking a clash, a mutual provocation and the inevitability of a common, closely linked mode of perception: Visually running along curved and shiny white surfaces, following and trying to untangle the overlapping, whirring lines is seductive and at the same time prompts one to resolve the staged deceptions and irritations of image and reproduction, of original form and copy.
Birgit Szepanski

The painter /Friederike Feldmann/ is known for her depictions of Baroque interiors, altars and Oriental carpets. In 2005 she began a picture series on painting of the 1950s and 60s for her contribution to the exhibition 50 Jahre documenta (Kassel). In 2006 she created an extensive wall painting on this theme at Galerie Barbara Weiss. The publication 21 Bilder has recently appeared at Verlag der Buchhandlung Walther König. In his photo series, videos, sculptures and interventions, /Erik Steinbrecher,/ who is known for his solo shows at Kunst-Werke, Berlin, P.S.1, New York and documenta X in Kassel, addresses themes such as phenomena of everyday life, industrial and mass products, ironizing and defamiliarizing them in the context of art. New works are on view in the group exhibition Mimétisme, Extra City Centrum for Contemporary Art, Antwerp. Recent publications include: Superfundi, Centre de la photographie Genéve, JRP/Ringier, 2007; Stubborn Statue, Erik Steinbrecher/Tomas Kadlcik, Centre de la photographie Genéve, Kodoji Press, 2008.