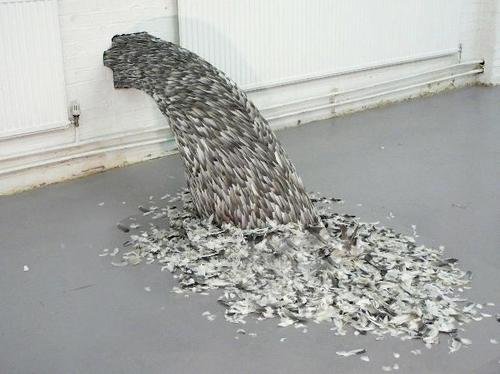 "No passion so effectively robs the mind of all its powers of acting and reasoning as fear."
Edmund Burke 1757

The term Gothic has had a number of interpretations since its architectural inception in the 11th Century: the darker aspects of Romanticism, Symbolism, and Surrealism, the Gothic novel, and classic Gothic horror movies. However, Gothic was originally used as a pejorative term by Giorgio Vasari to describe a culture that was considered rude and barbaric in opposition to the Renaissance that was sweeping Western Europe. During the Enlightenment, Gothic continued to have associations with the barbaric, the unsophisticated, and the irrational, and was posed in opposition to the good taste of rationalist or humanist thought. It is this enquiry into the ‘unenlightened, the superstitious, and the ugly’ that holds much contemporary interest. Thus ‘Gothic’ is a borrowed term in contemporary art, applied liberally to artworks centering on death, deviance, the erotic macabre, psychologically charged sites, disembodied voices and fragmented bodies. In that sense, Gothic is a heterogeneous mix of eras, taste, and styles, not merely a confluence of the sinister with the Romantic. Seen in this context, one can include aspects of Film Noir, the abject, the pornographic, and even elements of camp and kitsch.

Although the themes in contemporary Gothic art are often grounded in late 18th and 19th Century literature, they are also combined unselfconsciously with among other thing, medievalism, Romanticism, science fiction, Victoriana, and punk derived subcultures. It is more atmospheric than defined, and in many ways can be seen as a reaction to the more disciplinarian critical art theories of the last 30 plus years. Unlike the abject, Gothic is cultured and sensual, and wants to transcend the ordinary. It is the product of an excess of imagination, or a surplus of fantasy and desire, giving rise to images of horror, lust, repulsion and disgust. In turn this leads to a preoccupation with paranoia, the barbaric, and the taboo. It takes pleasure in the fragment, inconsistent narratives, the disjoined and the morphological.

For some time a number of artists have been responding to different aspects of this ‘genre’ to really interesting effect, however the aim of this exhibition is not to simply present the Gothic as a danse macabre but rather, through pushing the stylistic boundaries of what may be considered Gothic, explore what that term might now mean in contemporary practice. Despite their differences of style and approach, these artists do share a common language, they address a certain disquiet in respect of our relationship to the natural world and our place in it, that is different from an autobiographical display of angst. There are intimations of a need beyond the self, and echoes of Otherness. God, gargoyles, ghouls, long shadows and angled shots have all gone, but despite living in a post- Romantic world, some trace of these can be felt in these artists’ work. The old Gothic themes of the uncanny, the fantastic, and the pathological, are now also infused with the contemporary concerns about the body, disease, voyeurism, and power. Yet the irrational remains ever present, even if it is only our own projections and memories. Whether that is enough to constitute a notion of Gothic in our sceptical age is what drives much of the work in this exhibition.