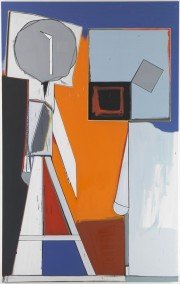 Thomas Scheibitz explores the elusive boundary between figurative and abstract, in both painting and sculpture. Scheibitz was born in Radeberg in Germany in 1968 and attended the Dresden Art Academy. He is drawn to a lexicon of shapes and forms that recur regularly in his work: stars, flowers, circles, globes, cubes, triangles and pyramids, as well as basic stick figures and faces. Scheibitz builds up his compositions meticulously yet intuitively using sketches, collage, drawing, photography and maquettes. These elements are all used by Scheibitz to construct a ‘storyboard’ or plan for a new series of work. With a digital camera he collects images of signs, designs and all manner of visual material, which, with found imagery from books or magazines, are often turned into drawings or collages.

These sources range all the way from an ancient Roman fresco, to a comic book, to a handbag advertisement. Dieter Schwartz describes Scheibitz’s collection as a search: ‘what Scheibitz is hoping to discover is the suggestion of something that might as easily be found in the styling of an advertisement as in a Gothic votive picture, a quality that cannot be formulated with anything but visual means and that inextricably transforms the found clipping into a thrilling event’. Over the years this image bank has been built into a huge ‘archive’ of visual material – which is stored for future use and can be referred back to at any time. This source material nevertheless has to be so transformed and synthesised within the image as to be fully integrated into the forms and indistinguishable from its origins – becoming instead part of the system of symbols and dynamic geometrics in his finished paintings and sculptures.

The title of this exhibition gives plenty of clues about the work of Thomas Scheibitz. ‘about 90 elements’ refers to the periodic table: the 90 or so elements that make up the stuff of the world. The second part comes from a headline referring to a Werner Herzog movie, roughly translated as ‘dead in the jungle’. Perhaps this allusion to a Herzog film can be summarised roughly as ‘man versus nature’ – remember Herzog’s film Fitzcarraldo? What this enigmatic title suggests is that not only do Thomas Scheibitz’s paintings and sculptures oscillate between abstraction and figuration, more unusually and significantly they also oscillate between the worlds of art and science, culture and nature.

This involvement with science was most apparent in Scheibitz’s sculptural contribution to the German Pavilion at the Venice Biennale in 2005 entitled Der Tisch, der Ozean und das Beispiel (The table, the ocean and an example). It was at that point that the artist’s plans and ideas for that ambitious work suggested he was wrestling with ‘big’ science questions of time and space, gravity and matter, creating complex structures, forms and voids in space and that the principles of physics as well as aesthetics were affecting his decisions. Scheibitz sets himself a problem regarding the interrelationship of colour, space, form and light and then solves it – first with sketches, then with drawings or models and finally in paintings and sculptures.

Scheibitz’s meticulous planning extends not just through his archive of preparatory materials but also to his interest in exhibition design and layout, and his passion for graphic design: in the past he’s either designed his own catalogues or heavily influenced them – not for him the attitude of the painter whose interest ends at the edges of the canvas. Scheibitz’s studio is divided into two halves – like the left and right brain – performing different but interrelated functions, he has a space for painting and a space for sculpture. The sculpture studio is crowded with unpainted sculptures: a room dedicated to pure structure without colour: cones, cubes, spheres, pyramids, and numerous hybrid forms jostle together - the building blocks of the three dimensional world. Next door is the painting studio, where paint is applied not only to canvas but also to the wooden forms Scheibitz has fashioned.

Scheibitz follows in a select line of painter/sculptors – i.e. those who not only work in both media (there are numerous examples: Henri Matisse from the past, Thomas Helbig from the present) but a more select band who have painted the surface of their sculptures: from Jean Arp to Georg Baselitz. Most art history in the West is predicated upon a search for purity and essence and this is particularly true in attitudes towards sculpture. Indeed the Renaissance misreading of classical sculpture and architecture as colour-free verges on anticipating the modernist notion of truth to materials. Most post-renaissance art until the twentieth century viewed painting on sculpture as either primitive or kitsch or both. In the twentieth century abstraction allowed for the return of colour to sculpture.

Scheibitz has developed his own grammar for painting on sculpture, which like his paintings, bows simultaneously to a residual interest in illusionism and representation and at the same time relishes the drips, splashes and material traces that are the legacy of painterly modernism. Indeed the whole point of painted sculpture rests upon it being a real object in space, which simultaneously inhabits an ‘artificial world’, by virtue of its disguised and painted exterior and its imagined and constructed form. It therefore exists in that realm of ‘second nature’ that Scheibitz describes as the location of his work: the paint helps to suggest that the sculpture has a correlative in the ‘real’ world, while simultaneously undermining any such belief. For example in Shaker Bau, 2006 the painting of the triangular vertical beside the house suggests a tree or chimney, but the haphazard application destroys any suggestion of illusionism.

The application of paint follows the formal logic of the structure, which in a subtle way behaves like the suggestions of representation in the paintings – a series of barely visible props or anchors referring to the real world: for example interior spaces and undersides are often painted darker shades to suggest shadow as in Sir Louise M., 2007. All Scheibitz’s paintings, sculptures and works on paper function together as one collective oeuvre: they are interrelated exercises in time and space, form and colour, in which the surface is scored with drips and erasures and in which materiality and representation are overlayed and interpenetrated. As Dieter Schwartz so neatly describes it, in Scheibitz’s world, of painting, sculpture or drawing ‘the window opens onto an impenetrable, splintered reality whose only certainty lies in the pictorial surface itself ’.
Emma Dexter, curator at Timothy Taylor Gallery, London