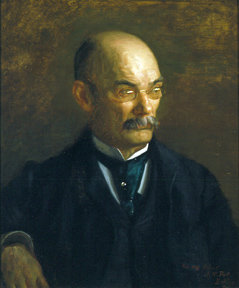 Williamstown, MA—the Williams College Museum of Art (WCMA) presents Model American Men, an exhibition that explores representations of male role models and conceptions of masculinity in American culture from 1850 to 1950. Examining the environment that shaped manhood and masculinity from the Civil War to the end of World War II, Model American Men depicts the everyday man to the national hero. The exhibited works raise awareness about the cultural expectations and attitudes surrounding these American “models.”

"A hundred years ago," says senior curator Nancy Mowll Mathews, "Americans believed that they could achieve perfection as modern men and modern women. We have often examined the rise of feminism and the representation of the modern woman in this period, but now we get a rare chance to consider the many facets of the modern man in the progressive era of the United States."

On view are 30 images of men by artists such as George Bellows, Thomas Hart Benton, Rube Goldberg, John Singer Sargent, and James Van Der Zee. The majority of the works are from the permanent collection of the Williams College Museum of Art, with additional loans from a private collection, Williams College Archives, and the Chapin Library of Rare Books.

In addition to painting and works on paper are 19th century handbooks for boys and Williams College archival photography, which highlight the notion of “Coming of Age” during this time period. As exemplified by texts such as Advice to Young Men and Boys, 1890, boys matured under the pressure of becoming specific “types” of men. Concerned with societal values and living in the age of Theodore Roosevelt’s “Strenuous Life,” these boys looked to role models to form their own identities. From war heroes to well-dressed gentlemen, period literature and recent art historical scholarship have both explored these various role models, which are reflected in this exhibition through the subcategories of soldiers, farmers, businessmen, athletes, and artists.

This exhibition is organized by Layla Bermeo and Rebecca Shykin, Williams Graduate Students in the History of Art, Class of 2009, with Nancy Mowll Mathews, Eugénie Prendergast Senior Curator of 19th and 20th Century Art and Lecturer in Art.

Williams College Museum of Art
15 Lawrence Hall Drive, Suite 2 - Williamstown MA
Open Tuesday through Saturday, from 10 a.m. to 5 p.m., and on Sunday from 1 to 5 p.m.
Admission is free and the museum is wheelchair accessible.