Staring at the sun. The exhibition includes video, installations and drawings. Ajit Chauhan's drawings evoke the traditional imagery of his parents' native India with a sharp contemporary edge. 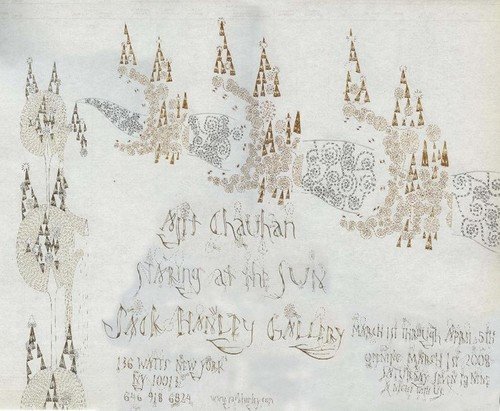 The Jack Hanley Gallery, New York, is pleased to present a solo show of the work of Ajit Chauhan, titled STARING AT THE SUN. The exhibition will include video, installations and drawings. Ajit Chauhan’s drawings evoke the traditional imagery of his parents’ native India with a sharp contemporary edge. Intricate, richly detailed, and delicately drawn in black and sepia ink on recycled pages, his sketches of hesitant symmetry show the hand at work. While illustrating his belief in the necessity for imperfection to enter the artistic process, Chauhan creates works that defy the notion of completion.

His films capture rural life in remote parts of India, where he traveled frequently and extensively. Departing from narrative-driven documentary form, Chauhan transforms his footage into an expressive compound, in which he superposes animated drawings and juxtaposes unusual scenes, from boats bulging with oddly shaped huts to stray dogs, to faces of idle villagers. Ajit Chauhan has shown his work at the Lab, the Jack Hanley Gallery and the Adobe Books Backroom in San Francisco. This is his New York debut.