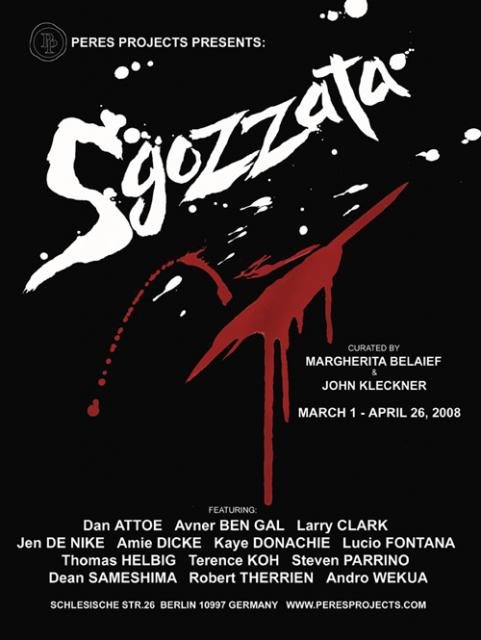 Peres Projects Berlin is pleased to present SGOZZATA, a group exhibition featuring:
Dan Attoe, Avner Ben Gal, Larry Clark, Jen De Nike, Amie Dicke, Kaye Donachie, Lucio Fontana, Thomas Helbig, Terence Koh, Steven Parrino, Dean Sameshima, Robert Therrien, and Andro Wekua.
.
SGOZZATA is an homage to the aesthetics and narrative form of classic Hollywood film noir and Italian giallo movies. The exhibition is a stylistic translation of these popular film genres into an art gallery context; a cinematic murder-mystery within the "white cube." SGOZZATA (Italian for slit throat) is an exhibition that, piece by piece, reveals the grim story of the violent murder of a young woman. Each work is a kind of scene or still taken from the non-existent film. Typical of the existential pessimism found in noir and giallo films, SGOZZATA is a bleak and ambiguous story of betrayal and violence; the dejected jealous husband and the doomed femme fatale succumb to their cruel fate. As clues to the crime, the works in SGOZZATA lure an investigative eye from beginning to the grisly end.

Accompanying SGOZZATA will be a series of film screenings featuring several classic film noir and giallo movies that inspired the exhibition. The first film will be shown on Wednesday, March 5 at 9pm at BASSO (Koepenicker Str. 187-188, Berlin), Dario Argento's "L'Uccello dalle Piume di Cristallo" (The Bird with Crystal Plumage), 1970. The other films and times will be announced shortly.

Javier Peres is very pleased to present the second Berlin solo exhibition of Dean SAMESHIMA, "Numbers II – Ode to Johnny Rio," a new series of silk-screens on canvas. The title refers to John Rechy's 1967 novel, Numbers, a thinly veiled auto-biographical portrait of a narcissistic, self-indulged, Johnny Rio, and his sexual forays in the cruising "scene" of Los Angeles – spurred on by the ravages of time, racking up bed partners becomes an obsession, and thus the protagonist, a dark angel of sex and stand-in for his progenitor, turns his tawdry, illicit world into a code of numbers.

Whether in his earlier photographs, his prints of appropriated images, or here with silk-screens drawn from photographs of John Rechy, Sameshima's subject matter deals in the currency of contemporary desire, nostalgia, vindication and accumulation, yet his works speak the language of seriality and the subversion of power structures. Like his earlier pop-forbear, Peter Roehr, Sameshima starts with the object, with the capacity of obsession it embodies and its imperative to be possessed. In a subtle move that straddles the two, Sameshima appropriates these objects, thus making them participate in a complex archive of signifiers, codes, and numbers.

This exhibition constitutes a sequel to the artist's first solo exhibition in Berlin in 2007, "Numbers", which presented a body of works from his series of dot paintings. The artist lives and works in Berlin and will be present for the opening.

"NUMBERS II – Ode to Johnny Rio" featuring Dean SAMESHIMA will be on view at Peres Projects Berlin (Schlesische Str. 26, Berlin, Germany) through April 26, 2008. Gallery Hours: Tuesday through Saturday, from 11:00 A.M. to 6:00 P.M. and by appointment.

Javier Peres is pleased to present the first solo exhibition in Germany of the Spanish artist, Antonio Ballester Moreno. Born in Madrid in 1977, the artist studied at the Universität der Künste in Berlin and graduated from the Universidad Complutense de Madrid, where he studied both painting and more contemporary forms of art practice. Upcoming exhibitions include a solo show at the Museo de Arte Contemporaneo de Castilla y Leon, Leon, Spain (MUSAC) in September.

Over the last few years, Antonio Ballester Moreno has decidedly focused on returning to the basics, often painting as a child, and even going as far as dedicating an entire week to only generating one type of image - for example scribbling triangles on his canvases for weeks, then dedicating another week to spreading dots over the works...the end results are works that can be seen as both abstract and figurative, real and surreal. Yet their bright colors and silly playfulness belie a darker side.

The title of the exhibition is drawn from the figure of Timothy Treadwell, the eco-warrior posthumously made famous by Werner Herzog's documentary Grizzly Man, who spent thirteen summers living in dangerous proximity to grizzly bears in Alaska's Katmai National Park. More at home among the simple laws of nature, Treadwell reflects a certain current in distrust of the industrial-technological system. Like Ted Kaczinski (the unabomber), who also makes an appearance in Antonio Ballester Moreno's works, his madness is indeed anti-social and manic; it is both chilling and brilliant.

Delving into the fascinating and unsettling waters between madness and society, Antonio Ballester Moreno creates works that teeter on the crux between man and nature, between technology and Walden-like hermeticism. These works approach true madness unromanticized – banal and inescapable, all the while with a low-fi approach that is comic, darkly comic. Antonio's oevre is full of Gondry-esque arts-and-crafts creations, acid-like hallucinations and endearing flights of fancy rendered in acrylics that pop off the canvas. With broad, heavily layered brushstrokes and occasional thick drips depicting everything from lions and pixelated flowers to castles and ghosts, he underlies his subjects with repeating patters (checkerboards, floral patterns, skulls) often executed in ink. The result is whimsical, Matisse meets Jacob Lawrence in its color palette and simplicity of composition, Jules de Balincourt meets South Park in its playfullness and often biting irony. Antonio's figures are romantic and nostalgic, churning up the forgotten, perhaps sublimated props of childhood which, in their conciously rough execution reveal the careful hand of someone who cares deeply about his subject. Indeed what the works of Antonio Ballester Moreno reveal is an absolutely authentic aesthetic in the face of their own disturbed context.