Abstraction, Informel, Stuttgart and Karlsruhe Painting School. The exhibition shows post-war tendencies, mainly from South Germany. Art history groups the names of the artists, about forty in all, from Ackermann to Zangs, under headings such as Lyrical Abstraction, Informel, Tachism, the Stuttgart and Karlsruhe schools, New Figuration Zero and Zen 49. The display features about 80 works and is also presenting current work that can be related back to these earlier artists. 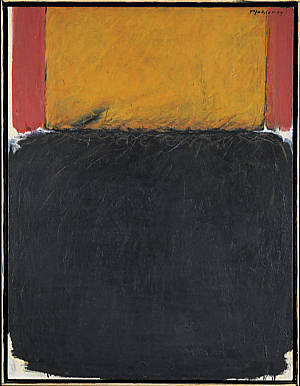 In about sixty exhibitions of the Daimler Art Collection since 2001, we have mainly concentrated on two focal points: abstraction and media art. For the sake of a consistent argument, we have for the most part excluded the area of German post-war movements in art originating mainly from south Germany. About forty artists in the collection belong to these. Art history files artists from Max Ackerman to Herbert Zangs under terms such as 'Lyrical Abstraction', 'Informel', 'Tachism', the 'Stuttgart' and the 'Karlsruhe school', 'Zero' and 'Zen 49'.

Willi Baumeister is both the nucleus of this category and the significant connection with representatives of classical modernism surrounding Hölzel from the beginning of the last century. In the years from 1946-55, Baumeister was a professor at the Kunstakademie Stuttgart. In 1947, he published his groundbreaking paper on art theory, 'Das Unbekannte in der Kunst' ('The Unknown in Art'.)

Baumeister became an inspirational friend and mentor to the married collectors Ottomar and Greta Domnick, who both worked as doctors specialising in psychiatry and neurology in Stuttgart. In January, 1947, they held a series of exhibitions at their surgery featuring artists including Baumeister, Fritz Winter, Max Ackermann and others. The collectors, art historians and artists also gave lectures on the theme of abstract art, and in 1947 Ottomar Domnick published his paper 'Die schöpferischen Kräfte in der abstrakten Malerei' ('Creative Energies in Abstract Painting'). In nearby Esslingen, the art theorist and philosopher Kurt Leonhard came to public notice with his work: 'Die heilige Fläche. Gespräche über moderne Kunst' ('The Sacred Surface: Discussions on Modern Art'), the significance of which still remains underestimated today. The theoretical foundations of Informel and the abstract avant-garde in post-war Germany can therefore be traced to Stuttgart, a fact which has seldom been recognised in the literature of art history.

Our 'Classical : Modern II' exhibition takes as its starting point Domnick's exhibition initiative dating from winter 1946/1947, unique and forward-looking for its time, where the artists represented here set the tone: Ackermann, Baumeister, Meistermann, Ritschl and Winter, supplemented by four of Baumeister's students from the period around 1950: Bernd Berner, Peter Brüning, Günter Fruhtrunk and Charlotte Posenenske. This last artist was rediscovered in 2001 initially through purchases of her work made by the Daimler Collection and more recently through her participation in the Kassel documenta.

Georg Karl Pfahler also studied under Baumeister in Stuttgart. He described his teacher as a 'Man of the world with a Swabian air, a Paris type, very knowledgeable, a gentleman'. The large room on the Daimler Contemporary Berlin exhibition tour is dedicated to 1960s painters of the 'Stuttgart school', including Pfahler, Otto Herbert Hajek, Thomas Lenk and Lothar Quinte. The Stuttgart painter Erdmut Bramke is a younger guest in this circle.

From Informel, the artists of the 'Stuttgart School' developed large scale color-field paintings which, as objects, exploded the traditional picture format while at the same time seeking a connection with architecture and urban planning. In 1967, their work was combined with their American contemporaries in an epoch-making exhibition at the Württembergischer Kunstverein Stuttgart entitled 'Forms of Color'. Pfahler had co-founded the 'Stuttgart Group' in 1954, a name which later came to be associated in Germany and France above all with the literary circle surrounding the philosopher Max Bense, who taught in Stuttgart.

The tour continues with a nod to the better-known centres of Informel in Germany - Berlin, Munich and Düsseldorf. Early trailblazers in this context who are still active today include Rupprecht Geiger in Munich, who, together with other artists including Ackermann, Baumeister, Thieler, Wildemann and Winter founded the 'Zen 49' group. In 1960/1961, Uwe Lausen from Tübingen arrived in Munich and came into contact with members of the 'Spur' group. In 1961 the young 'wild Informel' artist was sentenced to three weeks' youth detention due to blasphemous and pornographic statements made in a paper published by the 'Spur' group. Karl Fred Dahmen had developed his material-amorphous color areas in Paris in the early 1950s before accepting a professorship in Munich in 1967.

The Berlin sculptor Bernhard Heiliger represents, albeit with works from the 1980s, the area of Informel sculpture. Fred Thieler moved to Berlin from Munich in 1954, and from 1959 onwards had significant influence as a teacher. Thieler chanced upon K.R.H Sonderborg in 1953 in Paris. The well-travelled North German Sonderborg taught from 1965 to 1990 in Stuttgart. With him, we complete the circle to come back to our starting point. Düsseldorf, which since the founding of Manfred de La Motte's 'Galerie 22' in 1957 had been the main stronghold of Informel, is represented here only marginally, with a picture by the Rhinelander Gerhard Hoehme.

The transition to 'Zero' group is marked by its own set of works. 'Zero' was founded in 1957 in the form of evening exhibitions in Otto Piene's Düsseldorf studio, with Informel artists including Hoehme, Thieler, Dahmen and Geiger participating as guests. The pictorial objects by Alfonso Hüppi and Herbert Zangs forming part of this context are to be understood within the ambit of Zero. Christa Winter from Stuttgart frames a contemporary response.

Our exhibition closes with a look at the painters of the Karlsruhe School: the very significant teacher HAP Grieshaber and his students Horst Antes, Walter Stöhrer and Dieter Krieg, supplemented by other artistic positions which are closely connected with Stuttgart (Rudolf Schoofs and his student Herbert Egl) or with Karlsruhe (Arthur Stoll, as a student of Antes).